Question 1. In Summer vacations, Puneet motivated 500 people for blood donation and for this social work he received a cash award of ₹ 10,000. His father advised him to make a budget plan for spending this amount. He made the following plan :

(a) Make a pie-chart for the above data.(b) Which mathematical concept has been covered in the above problem?(c) Which values are depicted by Puneet in his budget plan? Sol. (a) To make a pie-chart, we have to determine central angles corresponding to various heads :

The required pie-chart is as given below : 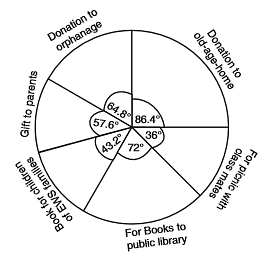 Question 2. 90 schools participated in a plantation programme. Each school planted 100 plants. After one month the number of plants that survived were recorded as :

(a) Present the data in a frequency table using classes 20-29, 30-39, ..... 90-99.(b) From the table find the number of schools where 50% or more plants survived?(c) Which mathematical concept is used in the above problem?(d) By taking part in the plantation programme which value is depicted by the participating schools? Sol. (a) The required frequency table is given as:

Question 3. 40 students of class IX contributed different amounts to Prime Minister’s Relief Fund. Vinod and Preeti were assigned to determine the mean amount of the class. Vinod comes out with his answer as ₹160 but Preeti found that the value of ₹165 was wrongly copied as ₹125 by Vinod and she gave the correct answer.

Question 4. Mrs. Prabha is a mathematics teacher in a school. She motivated 60 students from 2 sections of class IX to appear in proficiency-test in mathematics. The marks obtained by the students are as :

(a) Construct a group frequency distribution of the above data using classes 0 – 9, 10 – 19, etc. ...(b) Find the number of students who secured more than 49 marks.(c) Which mathematical concept is used in the above problem?(d) By encouraging students of class IX in proficiency-test, which skill is depicted by Mrs. Prabha? Sol. (a) 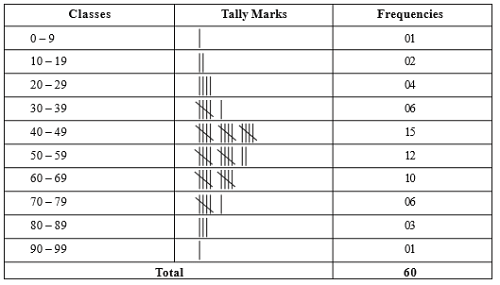 Question 5. 30 students from senior classes of a school plan to donate blood in a blood donation camp. Their blood groups are recorded as follows :

(a) Represent the given data in the form of a frequency distribution table.(b) Which is the most common blood group?(c) Which mathematical concept is used in the above problem?(d) By donating blood, which value is depicted by the students of senior classes? Sol. (a)