Vector quantities have both direction as well as magnitude such as velocity, acceleration,

force and momentum etc. We will use

for any general vector and its magnitude by

In diagrams vectors are denoted by arrows: the length of the arrow is proportional to the magnitude of the vector, and the arrowhead indicates its direction. Minus

)is a vector with the same magnitude as

but of opposite direction.

We define four-vector operations: addition and three kinds of multiplication.

be unit vectors parallel to the x, y and z axis, respectively. An arbitrary

can be expanded in terms of these basis vectors

The numbers Ax , Ay , and Az are called component of

geometrically, they are the projections of

along the three coordinate axes.(i) Rule: To add vectors, add like components.

(ii) Rule: To multiply by a scalar, multiply each component.

(iii) Rule: To calculate the dot product, multiply like components, and add.In particular,

(iv) Rule: To calculate the cross product, form the determinant whose first row is

whose second row is

(in component form), and whose third row is

Example 1: Find the angle between the face diagonals of a cube. 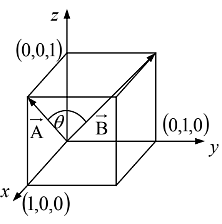 Example 2: Find the angle between the body diagonals of a cube. 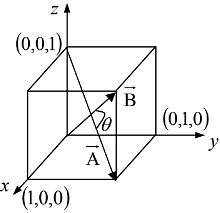 Example 3: Find the components of the unit vector nˆ perpendicular to the plane shown in the figure. 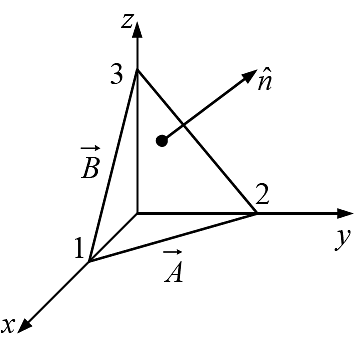 Since the cross product of two vectors is itself a vector, it can be dotted or crossed with a

is the volume of the parallelepiped generated by

is the area of the base, and

is the altitude. Evidently,

Note that the dot and cross can be interchanged:

The vector triple product can be simplified by the so-called BAC-CAB rule: 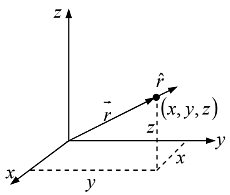 coordinates (x,y,z) . The vector to that point from the origin is called the position vector:

is the distance from the origin,and

where an electric charge is located, and a field point,

, at which we are calculating the electric or magnetic field. We can define separation vector

from the source point to the field point by

and a unit vector in the direction from

For closed surface area element is perpendicular to the surface pointing outwards as shown in figure below. 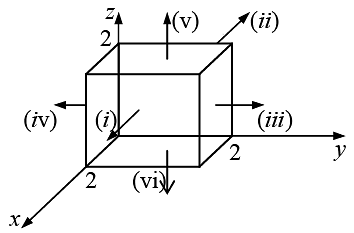 In spherical polar coordinate any general point P lies on the surface of a sphere. The

spherical polar coordinates r,θ,∅ of a point P are defined in figure shown below; r is

the distance from the origin (the magnitude of the position vector), θ (the angle drawn

from the z axis) is called the polar angle, and ∅ (the angle around from the x axis) is the 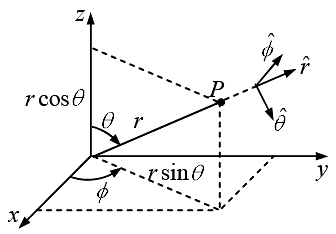 , pointing in the direction of increase of the

can be expressed in terms of them in the usual

Ar , Aθ , and A∅ are the radial, polar and azimuthal components of

An infinitesimal displacement in the

direction is simply dr (figure a), just as an

direction (figure b) is r dθdlθ = rdθSimilarly, an infinitesimal element of length in the

This plays the role (in line integrals, for example) that = 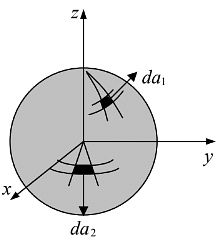 If we are integrating over the surface of a sphere, for instance,then r is constant, whereas θ and ∅ change, so

on the other hand, if the surface lies in the xy plane, then θ isconstant (θ = π/2) while r and ∅ vary, then 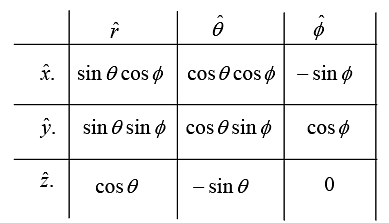 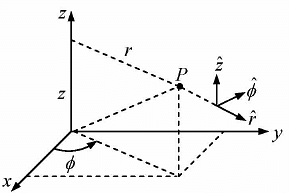 and volume element is dτ = r dr dФ, dz.We can transform any vector