Then Dot Product of two vectors is given by 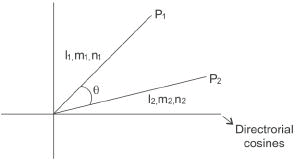 6. If slopes are given and angle between two curves is θ then tan θ = 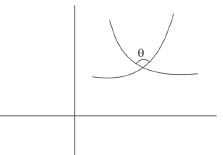 = unit vector normal to both

3. Angle between two vectors is θ then sin θ =

then cross product between two vectors

can be calculated as

are two sides of triangle then area of the triangle is

Derivative of a Vector:

be a position vector where t is a scalar variable.

Example 1: If ϕ = xyz then find the value of

4. Let ϕ(x,y,z) = c be given equation of the level surface then the outward unique normal vector is defined as

Let ϕ1(x,y,z) = C, ϕ2(x,y,z) = C be given equations of two level surfaces and angle between these two surfaces are given as θ then cos θ

then they are said to be orthogonal surfaces

Directional Derivatives of a Scalar Function

The directional derivative of a scalar function ϕ (x, y, z) in the direction of a vector

ve then it is in the opposite direction.

Divergence of a Vector

is a vector point function then

is called Divergence of

are the functions of x, y, z

1. Divergence of a vector is scalar.2. Physically Divergence measures (outflow - inflow)3. A vector whose divergence is zero then it is said to be divergence free vector (or) solenoid vector i.e. outflow = inflow = constant 4. Geometrically, Divergence gives the rate at which the fluid entering in a rectangular parallelepiped per unit volume at the point.

Curl of a Vector

is called the curl of a vector where

3. Divergence of a curl of any vector is always zero.

is known as a vector triple product.

The values of a, b, c so that the vector,

Given, that vector V is irrotational