The document Vector Spaces & Matrices Physics Notes | EduRev is a part of the Physics Course Basic Physics for IIT JAM.
All you need of Physics at this link: Physics

be field and let {\displaystyle V}

be a set. {\displaystyle V}

is said to be a Vector Space over {\displaystyle F}

along with the binary operations of addition and scalar product if

The elements of {\displaystyle V}

are called vectors while the elements of {\displaystyle F}

are called scalars. In most problems of Physics, the field {\displaystyle F}

or the set of complex numbers {\displaystyle \mathbb {C} }

can be visualised as the space of ordinary vectors "arrows" of elementary Physics.(ii) The set of all real polynomials {\displaystyle P(x)=a_{0}+a_{1}x+\ldots +a_{n}x^{n}}

is a vector space over {\displaystyle \mathbb {R} }

is also a vector spaces over {\displaystyle \mathbb {R} }

, with addition and scalar multiplication defined as is usual.Although the idea of vectors as "arrows" works well in most examples of vector spaces and is useful in solving problems, the latter two examples were deliberately provided as cases where this intuition fails to work.

A set E ⊂ V is said to be a basis for V if B is linearly independent and if B covers V.

If a vector space has a finite basis with n{\displaystyle n} elements, the vetor space is said to be n-dimensional 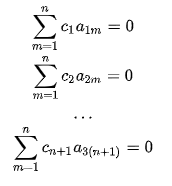 Note here that the inner product so defined is intrinsically dependent on the basis. Unless otherwise mentioned, we will assume the basis {\displaystyle {\hat {x}},{\hat {y}},{\hat {z}}}

while dealing with inner product of ordinary "vectors".

The collection of coefficients aij{\displaystyle a_{ij}} is called a matrix, written as

Let U, V be vector spaces over the field F Consider the set of all linear transformations T : U → V .

Observe that L(U, V) is an run dimensional vector space
Operations on Matrices:

we thus define the determinant for any square matrix

called the Kronecker delta is a symbol which you will encounter constantly in this book. It is defined as