As already noted in the previous chapter that vehicle arrivals can be modelled in two interrelated ways; namely modelling how many vehicle arrive in a given interval of time, or modelling what is the time interval between the successive arrival of vehicles. Having discussed in detail the former approach in the previous chapter, the first part of this chapter discuss how a discrete distribution can be used to model the vehicle arrival. Traditionally, Poisson distribution is used to model the random process, the number of vehicles arriving a given time period. The second part will discuss methodologies to generate random vehicle arrivals, be it the generation of random headways or random number of vehicles in a given duration. The third part will elaborate various ways of evaluating the performance of a distribution.

Suppose, if we plot the arrival of vehicles at a section as dot in a time axis, it may look like Figure 13:1. Let h1, h2, ... etc indicate the headways, then as mentioned earlier, they take some real values. Hence, these headways or inter arrival time can be modelled using some continuous distribution. Also, let t1, t2, t3 and t4 are four equal time intervals, then the number of vehicles arrived in each of these interval is an integer value. For example, in Fig. 13:1, 3, 2, 3 and 1 vehicles arrived in time interval t1, t2, t3 and t4 respectively. Any discrete distribution that best fit the observed number of vehicle arrival in a given time interval can be used. Similarly, any

where p(x) is the probability for x events will occur in the time interval, and µ is the expected rate of occurrence of that event in that interval. Some special cases of this distribution is given below.

Since the events are discrete, the probability that certain number of vehicles (n) arriving in an interval can be computed as:

Similarly, the probability that the number of vehicles arriving in the interval is exactly in a range (between a and b, both inclusive and a < b) is given as:

The hourly flow rate in a road section is 120 vph. Use Poisson distribution to model this vehicle arrival.

= 2 vehicle per minute. Hence, the probability of zero vehicles arriving in one minute p(0) can be computed as follows: 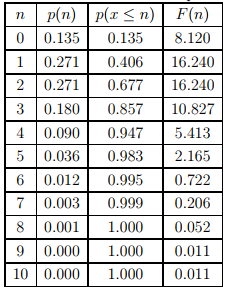 Similarly, the probability of one vehicles arriving in one minute p(1) is given by,

Now, the probability that number of vehicles arriving is less than or equal to zero is given as

Similarly, probability that the number of vehicles arriving is less than or equal to 1 is given as:

Again, the probability that the number of vehicles arriving is between 2 to 4 is given as:

The above calculations can be repeated for all the cases as tabulated in Table 13:1. The shape of this distribution can be seen from Figure 13:2 and the corresponding cumulative distribution is shown in Figure 13:3. 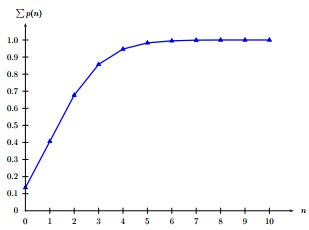 For simulation purposes, it may be required to generate number of vehicles arrived in a given interval so that it follows typical vehicle arrival. This is the reverse of computing the probabilities as seen above. The following steps give the procedure:

5. Set ni = n, where ni is the number of vehicles arrived in ith interval.

The steps 3 to 5 can be repeated for required number of intervals.

Generate vehicles for ten minutes if the flow rate is 120 vph.

Solution The first two steps of this problem is same as the example problem solved earlier and the resulted from the table is used. For the first interval, the random number (X) generated is 0.201 which is greater than p(0) but less than p(1). Hence, the number of vehicles generated in this interval is one (ni = 1). Similarly, for the subsequent intervals. It can also be computed that at the end of 10th interval (one minute), total 23 vehicle are generated. Note: This amounts to 2.3 vehicles per minute which is higher than given flow rate. However, this discrepancy is because of the small number of intervals conducted. If this is continued for one hour, then this average will be about 1.78 and if continued for then this average will be close to 2.02.

One can generate random variate following negative exponential distribution rather simply due to availability of closed form solutions. The method for generating exponential variates is based on inverse transform sampling:

has an exponential distribution, where f −1 , called as quantile function, is defined as

Note that if X is uniform, then 1 − X is also uniform and λ = 1/µ. Hence, one can generate exponential variates as follows:

where, X is a random number between 0 and 1, µ is the mean headway, and the resultant headways generated (t) will follow exponential distribution.

Simulate the headways for 10 vehicles if the flow rate is 120 vph. Solution Since the given flow rate is 120 vph, then the mean headway (µ) is 30 seconds. Generate a random number between 0 and 1 and let this be 0.62. Hence, by the above equation, t = 30 × (− log(0.62)) = 14.57. Similarly, headways can be generated. The table below given the generation of 15 vehicles and it takes little over 10 minutes. In other words, the table below gives the vehicles generated for 10 minutes. Note: The mean headway obtained from this 15 headways is about 43 seconds; much higher than the given value of 30 seconds. Of, course this is due to the lower sample size. For example, if the generation is continued to 100 vehicles, 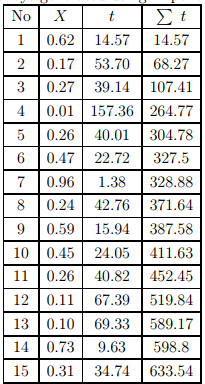 Evaluation of the mathematical distribution

where hi is the lower limit of the i th interval, and δh is the interval range. The standard deviation σc can be obtained by

If the distribution fit closely, then the mean and the standard deviation of the observed and fitted data will match. However, it is possible, that two sample can have similar mean and standard deviation, but, may differ widely in the individual interval. Hence, this can be considered as a quick test for the comparison purposes. For better comparison, Chi-square test which gives a better description of the suitability of the distribution may be used.

The Chi-square value (X2 ) can be computed using the following formula:

is the observed frequency,

is the computed (theoretical) frequency of the i th interval, and n is the number of intervals. Obviously, a X2 value close to zero implies a good fit of the data, while, high X2 value indicate poor fit. For an objective comparison Chi-square tables are used. A chi-square table gives X2 values for various degree of freedom. The degree of freedom (DOF) is given as

Compute the X2 statistic of the following distribution, where N = 2434. 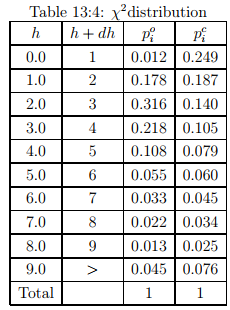