Ans: The liquid phase acts as a resistance phase for the movement of various gases.  The recirculator enables greater turbulence of the liquid phase stream.  Thereby, using these mechanisms, the gases are allowed to react with one another and produce ethylene dichloride which gets dissolved in the liquid.

Ans: This is an important question.  Allowing only refrigeration enhances process costs drastically. Therefore, water is used to carry out partial condensation and then refrigeration, even though in principle, water condensation can be bypassed and reactor operation and stream contacting can be further optimized.

3. Why do we need a settling tank after the acid wash unit associated to the crude ethylene dichloride?

Ans: Typically, we observe HCL removal from vapour streams.  In such case, the unit used is a scrubber or absorber.  The gas/vapour is fed to the absorption column and is obtained as a gas. When a liquid is allowed for scrubbing, it is possible to obtain emulsions of the organic phase in the aqueous phase. Therefore, provide gravity settling mechanism should exist so as to separate the crude ethylene dichloride from the mixture emanating from the acid wash tank. 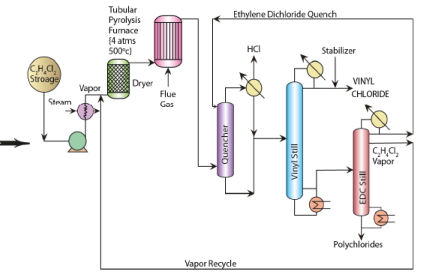 1. Why ethylene dichloride is dried before entering the cracking furnace?

2. Why quenching is carried out?

Ans: The selective cracking reaction is a reversible reaction.  Therefore, by doing cold ethylene dichloride quenching, we are suppressing the backward reaction and ensuring that only vinyl chloride gets formed in good quantities.

3. Can heat integration be carried out in the process?

Ans: IN principle it can be done but in reality no. The reason is that if quenching is not done immediately, then vinyl chloride can get converted back to the ethylene dichloride. Therefore, though there is a hot stream available, heat integration cannot be done due to prevalent process conditions.

4. Can a partial condenser be used in the last distillation column to serve for both quenching, distillation reflux and produce vapour for the ethylene dichloride?

Ans: Yes, this arrangement will be excellent as all requirements in the process will be met by going for a partial condenser. But it all depends on the quenching tower requirements and hence if ethylene dichloride needs to be cooled more than its boiling point, then partial condenser will not serve the purpose.

5. What is the effect of pressure on quenching. This question is interesting as the reaction occurs at 4 atm and quenching occurs at higher pressure?

Ans: Quenching is an operation used for minimizing temperature. As such its not absorption where pressure plays an important role. As such, the effect of pressure will not be significant in the quenching operation.