Question 1. A solid sphere of radius, r and made of material with density, ps is moving through the atmosphere (constant pressure, p) with a velocity, v. The net force ONLY due to atmospheric pressure (Fp) acting on the sphere at any time t, is    [2019 : 1 Mark, Set-ll](a) 4πr2p(b) 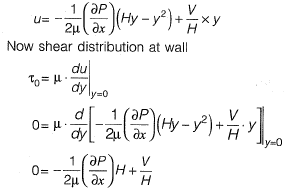 Question 4. With reference to a standard Cartesian (x, y) plane, the parabolic velocity distribution profile of fully developed laminar flow in x-direction between two parallel, stationary and identical piates that are separated by distance, h, is given by the expression

In this equation, the y = 0 axis lies equidistant between the plates at a distance h/2 from the two plates, p is the pressure variable and n is the dynamic viscosity term. The maximum and average velocities are, respectively    [2014 : 2 Marks, Set-II] Velocity expression for a laminar flow between two parallel plates is, 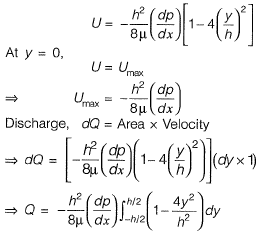 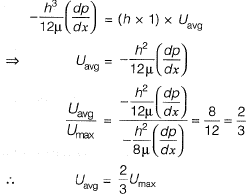