The document Volcanism and Volcanic Landforms Notes | EduRev is a part of the UPSC Course Geography for UPSC (Civil Services) Prelims.
All you need of UPSC at this link: UPSC

Volcanoes: Volcano is an opening or vent through which molten lava, ash, gases, etc. comes from the earth’s interior. Most of the volcanoes are concentrated at convergent and divergent plate boundaries, but others, located in the plates' interior, are associated with hot spots. Based on material erupted: These materials fell around the vent in successive layers, building up a characteristic volcanic cone.

These mountains are often called as mountains of accumulation.

These are the best land in a country and intensively cultivated and populated.

Economic importance of a plain increases if a river also passes through it.

Some most extensive temperate plains are grasslands like Russian steppes, North American Prairies and Argentina Pampas.

Based on their formation, 3 types – Structural, depositional and erosional plains.

Vulcanic activities affect Earth’s landforms. Solid, liquid or gaseous materials may find their way to the surface from some deep-seated reservoir beneath. For example – Geyser and springs, volcanic eruptions, sometimes gas sources are found. Molten magma is a mobile rock. It mostly enters weak portions of the crust.

Intrusive landforms – Magma while thrusting its way up to the surface may cool and solidify within the crust as plutonic rocks.

Rocks formed by either plutonic or volcanic activity are called igneous rocks. 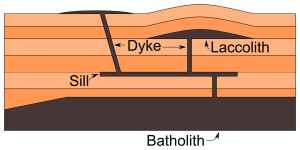 All of them took place differently in the Earth’s crust and solidified within the crust's upper layers.

There are 3 types of volcanoes – Active, Dormant and Extinct.

All volcanoes pass through Active, Dormant and Extinct stages but we are unsure when they will be extinct. Example – Mt. Vesuvius and Mt. Krakatau. Both known as extinct but erupted violently.

What comes out from the vent of the Volcano and what they do?

Crater formation – during an eruption the material from the top of the cone is blown off or collapses into vent widening the orifice into a large crater.

The Distribution of Volcanes in the World

How do geysers work?

Where are they found?