The document War with the Marathas Class 8 Notes | EduRev is a part of the Class 8 Course Social Studies (SST) Class 8.
All you need of Class 8 at this link: Class 8

Tipu Sultan – The “Tiger of Mysore”

The Company resorted to direct military confrontation when it saw a threat to its political or economic interests. This can be illustrated with the case of the southern Indian state of Mysore.

Mysore had grown in strength under the leadership of powerful rulers like Haidar Ali (ruled from 1761 to 1782) and his famous son Tipu Sultan (ruled from 1782 to 1799). Mysore controlled the profitable trade of the Malabar coast where the Company purchased pepper and cardamom. In 1785 Tipu Sultan stopped the export of sandalwood, pepper and cardamom through the ports of his kingdom, and disallowed local merchants from trading with the Company. He also established a close relationship with the French in India, and modernized his army with their help. 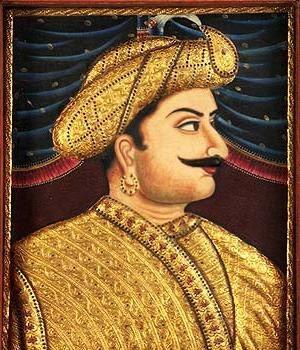 Only in the last – the Battle of Seringapatam – did the Company ultimately win a victory. Tipu Sultan was killed defending his capital Seringapatam, Mysore was placed under the former ruling dynasty of the Wodeyars and a subsidiary alliance was imposed on the state.

War with the Marathas:From the late eighteenth century the Company also sought to curb and eventually destroy Maratha power.

With their defeat in the Third Battle of Panipat in 1761, the Marathas’ dream of ruling from Delhi was shattered. They were divided into many states under different chiefs

(sardars) belonging to dynasties such as Sindhia, Holkar, Gaikwad and Bhonsle. These chiefs were held together in a confederacy under a Peshwa (Principal Minister) who became its effective military and administrative head based in Pune. Mahadji Sindhia and Nana Phadnis were two famous Maratha soldiers and statesmen of the late eighteenth century.

The Marathas were subdued in a series of wars. In the first war that ended in 1782 with the Treaty of Salbai, there was no clear victor. The Second Anglo- Maratha War (1803-05) was fought on different fronts, resulting in the British gaining Orissa and the territories north of the Yamuna river including Agra and Delhi.

Finally, the Third Anglo-Maratha War of 1817-19 crushed Maratha power. The Peshwa was removed and sent away to Bithur near Kanpur with a pension. The Company now had complete control over the territories south of the Vindhyas. The claim to paramountcy
Under Lord Hastings (Governor- General from 1813 to 1823) a new policy of “paramountcy” was initiated. Now the Company claimed that its authority was paramount or supreme, hence its power was greater than that of Indian states. In order to protect its interests it was justified in annexing or threatening to annex any Indian kingdom. This view continued to guide later British policies as well.

In the late 1830s the East India Company became worried about Russia. It imagined that Russia might expand across Asia and enter India from the north-west. Driven by this fear, the British now wanted to secure their control over the north-west. They fought a prolonged war with Afghanistan between 1838 and 1842 and established indirect Company rule there. Sind was taken over in 1843. Next in line was Punjab. But the presence of Maharaja Ranjit Singh held back the Company. After his death in 1839, two prolonged wars were fought with the Sikh kingdom. Ultimately, in 1849, Punjab was annexed.