Werner treated the first four complexes of Co(III) given in Table 1, with an excess of AgNO3. The white precipitate of AgCl were obtained in different amount:

Werner reported that in CoCl3.6NH3 all the three chlorides satisfy only primar y valence and the six ammonia molecules satisfy only the secondary valency. The primary valencies represented by dotted lines (...) and secondary valencies are represented by solid line ( —). The structure of CoCl3·6NH3 is shown in figure 1 (a). This compound in aqueous solution gives total number of four ions i.e. three Cl– and one [Co(NH3)6]3+ ions. Thus, in modern term this compound is written as [Co(NH3)6]Cl3. When this compound is treated with an excess of AgNO3 solution, all three Cl– ions are precipitated as AgCl.

line. [Fig. 1(b)]. When this compound is treated with an excess of AgNO3 solution, only two chloride ions are precipitated as AgCl.This indicates that t he Cl– ions which satisfy only the primary valencies are ionisable. In aqueous solution total number of three ions are obtained i.e., one [Co(NH3)5Cl]2+ and two Cl– ions. In modern term this compound is written as [Co(NH3)5Cl]Cl2. The structure of [Co(NH3)5Cl]Cl2 is shown in Fig. 1(b). 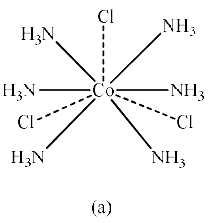 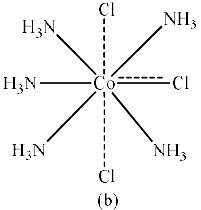 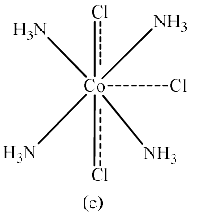 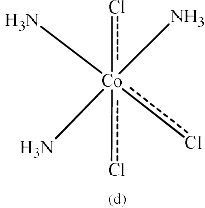 The possible isomers for the ammine complexes of Co(III) for all the three geometries are given in the Table 2: 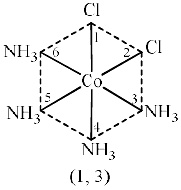 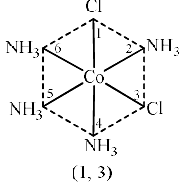 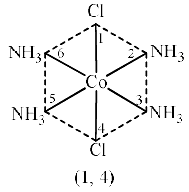 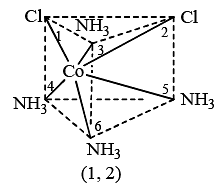 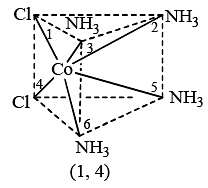 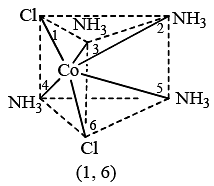 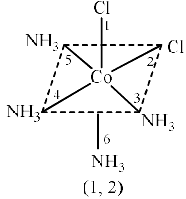 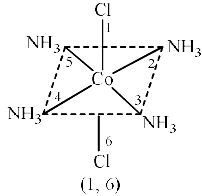 Fig. 4. cis- and trans-isomer of [Pt(NH3)2Cl2].Werner also suggested that in tetrahedral complexes only one arrangement is possible round the metal cation.

Evidence in Favour of Werner’s Theory

This indicates that the number of ions and the number of charges decrease in the same order as shown in the table 1.3. The molar conductance measurement of Co(III) chloride complexes with ammonia suggest the structures similar to structure suggested by Werner.

Table 3. Elucidation of Structure of Co(III) and Pt(IV) Complexes on the Basis of Conductance and Cryoscopic Measurements.

(3) Precipitation Reaction: The number of ions furnished by a coordination compound can also be determined by precipitation reactions. When the complexes CoCl3.6NH3, CoCl3.5NH3 and CoCl3.4NH4 are treated with an excess of AgNO3 solution, the number of chloride ions precipitated as AgCl is 3, 2 and 1 respectively. Thus indicates that the number of chloride ions in ionization sphere are 3, 2 and 1 respectively. The structures provided by precipitation reactions are similar to those given by Werner. The complex CoCl3.3NH3 gives no precipitate with AgNO3 solution. This indicates that all the three Cl– ions are present in the coordination sphere in this compound. Electronic spectra (UV-visible) and X-rays spectroscopy are the recent methods to determine the structure of complexes. Electronic spectra give the information about the energies of orbitals, shapes of complexes (i.e., either the complex is octahedral or distorted octahedral or tetrahedral). X-rays spectroscopy gives the information about the structure of complex, bond lengths and bond angles. Magnetic moment measurement gives the information about the complexes viz. Either the complex is tetrahedral or square planar or octahedral.

Illustrative Example: An isomer of CrCl3 6H2O reacts with one mole AgNO3 to give one mole of precipitate of AgCl. What is the compound?

Answer. Only those ions which are present outside the coordination sphere can be ionised.

18. Sidgwick concept of Coordinate Bond According to Sidgwick’s concept the ligands donate electron pairs to the metal cation or atom resulting in the formation of the coordinate bonds between metal and the ligands which is represented as M ← L.

The donation of an electron pair by N atom of Nh3 has been represented by an arrow. The coordination bond is very similarly covalent bond.

Limitations of Sidgwick’s Concept: The donation of one electron pair by each ligand to the central metal cation atom to form M ← L coordinate bonds cause the accumulation of negative charge on the central metal cation atom. Due to accumulation of a negative charge on the metal cation or atom, a partial ionic character is created in the complex making it less stable. According to Pauling’s electroneutrality principal, the metal ligand bonds have some ionic character.

To prevent the accumulation of negative charge in metal cation or atom, either the bond pair of electrons must be attracted more strongly to the donor atoms of the ligands or in addition to the σ-bond there should be metal to ligand π-bonding.

Number of electrons on Co atom = 27

20. 18 electron rule An alternate and more general rule is the 18 electron rule. According to this rule, in a complex the sum of valence electrons and the electrons donated by the ligands is 18. It provides a closed and stable configuration, ns2 (n – 1) d10 np6.