The document Weather,Climate and Adaptations of Animals to Climate - Class 7 Class 7 Notes | EduRev is a part of Class 7 category.
All you need of Class 7 at this link: Class 7
Needed a Document for Weather climate and adaptations of animals to climate?
Related: Important Points - Weather & Climate, Class 7, Science


Weather,Climate and Adaptations of Animals to Climate

(1)The day- to – day condition of the atmosphere at a place with respect to the temperature, humidity, rainfall, wind speed etc., is called the weather at that place.

(2)The temperature, humidity, rainfall, wind speed and other factors are called the elements of weather.

(3)The weather of a place changes day after day and week after week. It can very over very short periods of time. (4)Weather reports are prepared by the Meteorological Department of the Government.

(5)Rainfall is measured by an instrument called the rain gauge. It is basically a measuring cylinder with a funnel on top to collect rainwater.

(8) The average weather pattern taken over a long time, say 25 years is called the climate of the place.

(10)We can compare the climate of two places by their climate records.

(11) Kerala is hot and wet in comparison of Jammu & Kashmir which has cold climate. Similarly Rajasthan has high temperature for most part of the year, very low temperature during few months of winter and very little rainfall. It is the typical desert climate. It is hot and dry. The north- eastern India receives rain for a major part of the year. Hence it has wet climate.

(i) These are covered with snow for most part of the year.

(iii) The temperature reaches to -370c in winters.

(14) Adaptation by the animals of polar regions:-

(i) Adaptations of polar bear are showing with the help of a web chart given below: 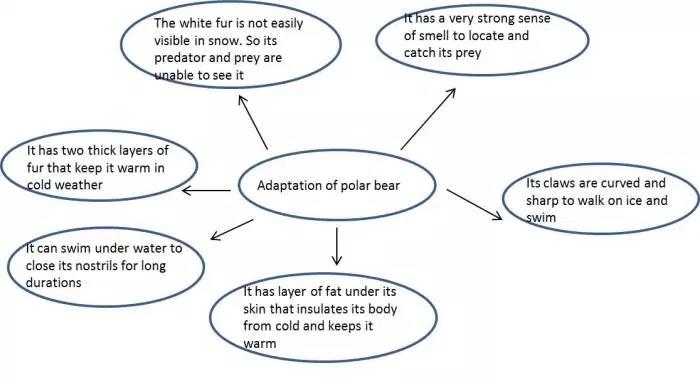 (ii) Adaptations of penguins are showing with the help of a web chart given below:

(iii) Fishes can remain under cold water for long.

(iv)Musk oxen, reindeers, foxes have thick skin and lots of fat to keep them warm.

(v) Birds have to keep themselves warm to survive. So, they migrate to warm regions in winter and go back after winter. India is one of the destinations of birds. Bharatpur in Rajasthan, Sultanpur in Haryana, Nal Sarovar in Gujarat and some wetlands of north east are famous for migratory birds. 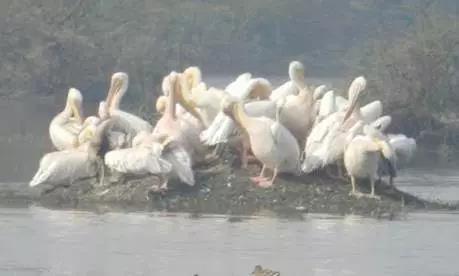 (i)These are located around the equator. So, they have hot climate.

(ii) Temperature in summer cross 400C and in winter higher than 150C.

(iii) Days and nights are almost equal in length.

(vi) Wide variety of animals and plants are finding in these forests due to continuous warmth and rain. 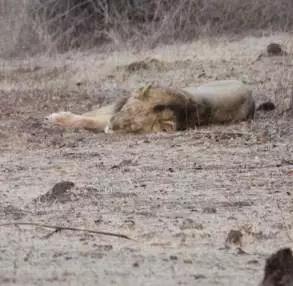 (16) Adaptation of animals in tropical rainforests:

(i)Red eyed frog has developed sticky pads on its feet to climb on tree.

(ii) Monkeys have hands, feet and long tail to hold the branches of the tree.

(iii)Bird toucan has a long, large beak which helps it to reach the fruits on branches.

(iv)Big cats like tiger and lion have sensitive hearing and thick skins Which help them to listen sound of other animals.

(v) Adaptation by the lion -tailed macaque (Beard ape) is given below: 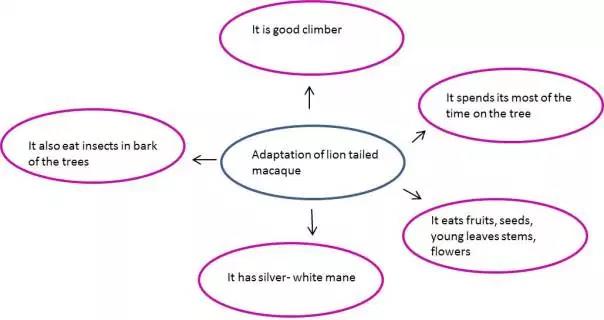 (vi) Adaptation by the elephant is given below: