Wedge: A wedge is in general a triangular object which is placed between two objects to either hold them in place or is used to move one relative to the other. For example, the following shows a wedge under a block that is supported by the wall.

If the force P is large enough to push the wedge forward, then the block will rise and the following is an appropriate free-body diagram. Note that for the wedge to move one needs to have slip on all three surfaces. The direction of the friction force on each surface will oppose the slipping. Since before the wedge can move each surface must overcome the resistance to slipping, one can assume that

These equations and the equations of equilibrium are combined to solve the problem. If the force P is not large enough to hold the top block from coming down, then the wedge will be pushed to the left and the appropriate free-body diagram is the following. Note that the only change is the direction of the frictional forces. A similar analysis to the above yield the solution to the problem. 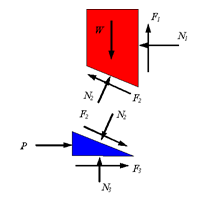