2. The position vector of the force is r = xi3. The potential energy follows as

where we have taken the constant to be zero.

where Q1 and Q2 are the charges on the two particles, and ε is a fundamental physical constant known as the Permittivity of the medium surrounding the particles. Since the force is zero when the particles are infinitely far apart, we take r0 at infinity. The potential energy follows as

4.1.5 Potential energy of concentrated moments exerted by a torsional spring A solid rod is a good example of a torsional spring. You could take hold of the ends of the rod and twist them, causing one end to rotate relative to the other. To do this, you would apply a moment or a couple to each end of the rod, with direction parallel to the axis of the rod. The angle of twist increases with the moment.

More generally, a torsional spring resists rotation, by exerting equal and opposite moments on objects connected to its ends. For a linear spring the moment is proportional to the angle of rotation applied to the spring.

The figure shows a formal free body diagram for two objects connected by a torsional spring. If object A is held fixed, and object B is rotated through an angle  about an axis parallel to a unit vector n, then the spring exerts a moment The potential energy of the moments exerted by the spring can be determined by computing the work done to twist the spring through an angle θ .

1. The work done by a moment M due to twisting through a very small angle dθ about an axis parallel to a vector n is dW = M.dθn

2. The potential energy is the negative of the total work done by M, i.e

4.1.6 Definition of the Kinetic Energy of a particle

Consider a particle with mass m which moves with velocity v = vxi + vyj + vzk. By definition, its kinetic energy is

Consider a particle with mass m that moves under the action of a force F. Suppose that

be the total work done by the force

This is just another way of writing Newton’s law for the particle: to see this, note that we can take the dot product of both sides of F=ma with the particle velocity

To see the last step, do the derivative using the Chain rule and note that a.b = b. a.

This follows by integrating the power-kinetic energy relation with respect to time.

There are two main applications of the work-power-kinetic energy relations. You can use them to calculate the distance over which a force must act in order to produce a given change in velocity. You can also use them to estimate the energy required to make a particle move in a particular way, or the amount of energy that can be extracted from a collection of moving particles (e.g. using a wind turbine)

Example 1: Estimate the minimum distance required for a 14 wheeler that travels at the RI speed-limit to brake to a standstill. Is the distance to stop any different for a Toyota Echo?

1. We assume that all the wheels are locked and skid over the ground (this will stop the vehicle in the shortest possible distance)2. The contacts are assumed to have friction coefficient μ = 0.83. The vehicle is idealized as a particle.4. Air resistance will be neglected.

1. The figure shows a free body diagram.2. The equation of motion for the vehicle is

This simple calculation suggests that the braking distance for a vehicle depends only on its speed and the friction coefficient between wheels and tires. This is unlikely to vary much from one vehicle to another. In practice there may be more variation between vehicles than this estimate suggests, partly because factors like air resistance and aerodynamic lift forces will influence the results, and also because vehicles usually don’t skid during an emergency stop (if they do, the driver loses control) – the nature of the braking system therefore also may change the prediction.

Example 3: Compare the power consumption of a Ford Excursion to that of a Chevy Cobalt during stopstart driving in a traffic jam.

1. We assume that the speed in a traffic jam is low enough that air resistance can be neglected.2. The energy to accelerate to speed V is mV2 / 2 .3. We assume that the vehicle accelerates and brakes with constant acceleration – if so, its average speed is V/2.4. If the vehicle travels a distance d between stops, the time between two stops is 2d/V.5. The average power is therefore mV d / 4 .6. Taking V=15mph (7m/s) and d=200ft (61m) are reasonable values – the power is therefore 0.03m, with m in kg. A Ford Excursion weighs 9200 lb (4170 kg), requiring 125 Watts (about that of a light bulb) to keep moving. A Chevy Cobalt weighs 2681lb (1216kg) and requires only 36 Watts – a very substantial energy saving.

Reducing vehicle weight is the most effective way of improving fuel efficiency during slow driving, and also reduces manufacturing costs and material requirements. Another, more costly, approach is to use a system that can recover the energy during braking – this is the main reason that hybrid vehicles like the Prius have better fuel economy than conventional vehicles.

Example 4: Estimate the power that can be generated by a wind turbine.

To do this properly needs a very sophisticated analysis of the air flow around the turbine. However, we can get a rather crude estimate of the power by assuming that the turbine is able to extract all the energy from the air that flows through the circular area swept by the blades.

Calculation: Let V denote the wind speed, and let p denote the density of the air.

3. The kinetic energy of the cylindrical region of air is

4. The rate of flow of kinetic energy through the fan is therefore

5. If all this energy could be used to do work on the fan blades the power generated would be

A more sophisticated calculation (which will be covered in EN810) shows that in practice the maximum possible amount of energy that can be extracted from the air is about 60% of this estimate. On average, a typical household uses about a kW of energy; so a single turbine could provide enough power for about 5- 10 houses.

4.1.9 Energy relations for a conservative system of particles.

The figure shows a `system of particles’ – this is just a collection of objects that we might be interested in, which can be idealized as particles. Each particle in the system can experience forces applied by: 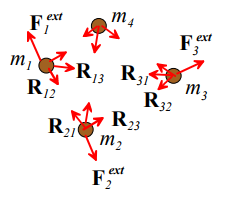 We define the total external work done on the system during a time interval t0 < t < t0 + Δt as the sum of the work done by the external forces.

We also define the total kinetic energy Ttotal of the system as the sum of kinetic energies of all the particles.

The work-energy relation for the system of particles can then be stated as follows. Suppose that

1. At some time t0 the system has and kinetic energy

2. At some later time t the system has kinetic energy Ttotal .

denote the potential energy of the force at time t0

4. Let Vtotal denote the potential energy of the force at time t

Work Energy Relation: This law states that the external work done on the system is equal to the change in total kinetic and potential energy of the system.

We won’t attempt to prove this result - the proof is conceptually very straightforward: it simply involves summing the work-energy relation for all the particles in the system; and we’ve already seen that the work-energy relations are simply a different way of writing Newton’s laws. But when written out the sums make the proof look scary and difficult to follow so we’ll spare you the gory details. If you are interested, ask us (or better still see if you can do it for yourself!)

Energy conservation law For the special case where no external forces act on the system, the total energy of the system is constant

It is worth making one final remark before we turn to applications of these law. We often invoke the principle of conservation of energy when analyzing the motion of an object that is subjected to the earth’s gravitational field. For example, the first problem we solve in the next section involves the motion of a projectile launched from the earth’s surface. We usually glibly say that `the sum of the potential and kinetic energies of the particle are constant’ – and if you’ve done physics courses you’ve probably used this kind of thinking. It is not really correct, although it leads to a more or less correct solution.

Properly, we should consider the earth and the projectile together as a conservative system. This means we must include the kinetic energy of the earth in the calculation, which changes by a small, but finite, amount due to gravitational interaction with the projectile. Fortunately, the principle of conservation of linear momentum (to be covered later) can be used to show that the change in kinetic energy of the earth is negligibly small compared to that of the particle.