In this chapter, we shall introduce (but not in this order) the following general concepts:

We will also illustrate how these concepts can be used in engineering calculations. As you will see, to applying these principles to engineering calculations you will need two things: (i) a thorough understanding of the principles themselves; and (ii) Physical insight into how engineering systems behave, so you can see how to apply the theory to practice. The first is easy. The second is hard, and people who can do this best make the best engineers. 4.1 Work, Power, Potential Energy and Kinetic Energy relations The concepts of work, power and energy are among the most powerful ideas in the physical sciences. Their most important application is in the field of thermodynamics, which describes the exchange of energy between interacting systems. In addition, concepts of energy carry over to relativistic systems and quantum mechanics, where the classical versions of Newton’s laws themselves no longer apply. In this section, we develop the basic definitions of mechanical work and energy, and show how they can be used to analyze motion of dynamical systems. Future courses will expand on these concepts further.

The concepts of work, power and energy are among the most powerful ideas in the physical sciences. Their most important application is in the field of thermodynamics, which describes the exchange of energy between interacting systems. In addition, concepts of energy carry over to relativistic systems and quantum mechanics, where the classical versions of Newton’s laws themselves no longer apply.

In this section, we develop the basic definitions of mechanical work and energy, and show how they can be used to analyze motion of dynamical systems. Future courses will expand on these concepts further.

4.1.1 Definition of the power and work done by a force

Suppose that a force F acts on a particle that moves with speed v.

The Power developed by the force, (or the rate of work done by the force) is P = F.v . If both force and velocity are expressed in

Work has units of Nm/s, or `Watts’ in SI units.

The work done by the force can also be calculated by integrating the force vector along the path traveled by the force, as

where r0,r1 are the initial and final positions of the force.

Work has units of Nm in SI units, or `Joules’

A moving force can do work on a particle, or on any moving object. For example, if a force acts to stretch a spring, it is said to do work on the spring.

4.1.2 Definition of the power and work done by a concentrated moment, couple or torque

Definition of an angular velocity vector Visualize a spinning object, like the cube shown in the figure. The box rotates about an axis – in the example, the axis is the line connecting two cube diagonals. In addition, the object turns through some number of revolutions every minute. We would specify the angular velocity of the shaft as a vector ω, with the following properties:

The angular velocity vector is then

Since angular velocity is a vector, it has components ω = ωxi + ωyj + ωzk in a fixed Cartesian basis.

Rate of work done by a torque or moment: If a moment M = Mxi + Myj + Mzk acts on an object that rotates with angular velocity ω, the rate of work done on the object by M is

Example 2: Calculate a formula for the work required to stretch a spring with stiffness k and unstretched length L0 from length l0 to length l1 .

The figure shows a spring that held fixed at A and is stretched in the horizontal direction by a force F = Fxi acting at B. At some instant the spring has length l0 < x < l1 . The spring force law states that the force acting on the spring at B is related to the length of the spring x by

The position vector of the force is r = xi , and therefore the work done is

Example 3: Calculate the work done by gravity on a satellite that is launched from the surface of the earth to an altitude of 250km (a typical low earth orbit).

4. We will assume that the satellite is launched along a straight line path parallel to the i direction, starting the earths surface and extending to the altitude of the orbit. It turns out that the work done is independent of the path, but this is not obvious without more elaborate and sophisticated calculations.

1. The gravitational force on the satellite is

2. The work done follows as

3. Substituting numbers gives 9.7 x106 J (be careful with units – if you work with kilometers the work done is in N-km instead of SI units Nm)

Example 4: A Ferrari Testarossa skids to a stop over a distance of 250ft. Calculate the total work done on the car by the friction forces acting on its wheels.

2. The coefficient of friction between wheels and road is of order 0.8

3. We assume the brakes are locked so all wheels skid, and air resistance is neglected

Calculation The figure shows a free body diagram. The equation of motion for the car is

1. The vertical component of the equation of motion yields NR + NF = mg

2. The friction law shows that

3. The position vectors of the car’s front and rear wheels are rF = xi    rR = (x+L)i. The work done follows as. We suppose that the rear wheel starts at some point x0i when the brakes are applied and skids a total distance d.

Example 5: The figure shows a box that is pushed up a slope by a force P. The box moves with speed v. Find a formula for the rate of work done by each of the forces acting on the box.

The figure shows a free body diagram. The force vectors are 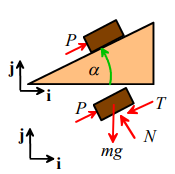 Evaluating the dot products F.v for each formula, and recalling that cos2α +  sin2 α = 1 gives

Example 6: The table lists the experimentally measured force-v-draw data for a longbow. Calculate the total work done to draw the bow.

In this case we don’t have a function that specifies the force as a function of position; instead, we have a table of numerical values. We have to approximate the integral numerically.

To understand how to do this, remember that integrating a function can be visualized as computing the area under a curve of the function, as illustrated in the figure.

We can estimate the integral by dividing the area into a series of trapezoids, as shown. Recall that the area of a trapezoid is (base x average height), so the total area of the function is

4.1.4 Definition of the potential energy of a conservative force

With that proviso, consider a force F acting on a particle at some position r in space. Recall that the work done by a force that moves from position vector 0 r to position vector r1 is

In general, the work done by the force depends on the path between r0 to r1 . For some special forces, however, the work done is independent of the path. Such forces are said to be conservative.

For a force to be conservative:

The force must be a function only of its position – i.e. it can’t depend on the velocity of the force, for example.

The potential energy of a conservative force is defined as the negative of the work done by the force in moving from some arbitrary initial position r0 to a new position r , i.e.

The constant is arbitrary, and the negative sign is introduced by convention (it makes sure that systems try to minimize their potential energy). If there is a point where the force is zero, it is usual to put r0 at this point, and take the constant to be zero.

If we choose to work with Cartesian components, then

Occasionally, you might have to calculate a potential energy function by integrating forces – for example, if you are interested in running a molecular dynamic simulation of a collection of atoms in a material, you will need to describe the interatomic forces in some convenient way. The interatomic forces can be estimated by doing quantum-mechanical calculations, and the results can be approximated by a suitable potential energy function. Here are a few examples showing how you can integrate forces to calculate potential energy