The document Doc: Work Energy Theorem Class 11 Notes | EduRev is a part of the Class 11 Course Physics For JEE.
All you need of Class 11 at this link: Class 11

If the resultant or net force acting on a body is Fnet then Newton's second law states thatFnet = ma ...(1)If the resultant force varies with x, the acceleration and speed also depend on x. Work done by net force Fnet in displacing a particle equals to the change in kinetic energy of the particle i.e.we can write eq. (3) in following way(W.D)C + (W.D)N.C + (W.D)ext. + (W. D)pseudo

Questions Based on work Energy Theorem :

(A) When only one conservative force is acting

Ex.14 The block shown in figure is released from rest. Find out the speed of the block when the spring is compressed by 1 m.

At position B if speed of the block is v then

Putting the above values in equation (i), we get

Ex.15 A block of mass m is dropped from height h above the ground. Find out the speed of the block when it reaches the ground.Sol. 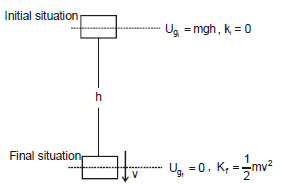 Figure shows the complete description of the problem only one conservative force is working on the block. So from mechanical energy conservation

(B) When two conservative force are acting in problem.

Ex.16 One end of a light spring of natural length d and spring constant k is fixed on a rigid wall and the other is attached to a smooth ring of mass m which can slide without friction on a vertical rod fixed at a distance d from the wall. Initially the spring makes an angle of 37º with the horizontal as shown in fig. When the system is released from rest, find the speed of the ring when the spring becomes horizontal. [sin 37º = 3/5]

Sol. If l is the stretched length of the spring, then from figure

Now, taking point B as reference level and applying law of conservation of mechanical energy between A and B,

Ex.17 The block shown in figure is released from rest and initially the spring is at its natural length. Write down the energy conservation equation. When the spring is compressed by l1 ?

(C) When only one non conservative force is included in problem.

Ex.18 Find out the distance travelled by the block as shown in figure. If the initial speed of the block is v and m is the friction coefficient between the surface of block and ground.

Ex.19 A particle slides along a track with elevated ends and a flat central part as shown in figure. The flat portion BC has a length l = 3.0 m. The curved portions of the track are frictionless. For the flat part the coefficient of kinetic friction is mk = 0.20, the particle is released at point A which is at height h = 1.5 m above the flat part of the track. Where does the particle finally comes to rest?Sol. As initial mechanical energy of the particle is mgh and final is zero, so loss in mechanical energy

After starting from B the particle will reach C and then will rise up till the remaining KE at C is converted into potential energy. It will then again descend and at C will have the same value as it had when ascending, but now it will move from C to B. The same will be repeated and finally the particle will come to rest at E such thatBC + CB + BE = 7.5or 3 + 3 + BE = 7.5i.e., BE = 1.5

So, the particle comes to rest at the centre of the flat part.

Ex.20 A 0.5 kg block slides from the point A on a horizontal track with an initial speed 3 m/s towards a weightless horizontal spring of length 1 m and force constant 2 N/m. The part AB of the track is frictionless and the part BC has the coefficient of static and kinetic friction as 0.22 and 0.20 respectively. If the distance AB and BD are 2 m and 2.14 m respectively, find the total distance through which the block moves before it comes to rest completely. [g = 10 m/s2]

Sol. As the track AB is frictionless, the block moves this distance without loss in its initial

Now, if the spring is compressed by x

which on solving gives positive value of x = 0.1 m

After moving the distance x = 0.1 m the block comes to rest. Now the compressed spring exerts a force :

Since, F < fL. The block will not move back. So, the total distance moved by block

Sol. We solve the above problem with respect to the sphere. So apply a pseudo force on the particle

Ex.22 In the arrangement shown in figure mA = 4.0 kg and mB = 4.0 kg. The system is released from rest and block B is found to have a speed 0.3 m/s after it has descended through a distance of 1m. Find the coefficient of friction between the block and the table. Neglect friction elsewhere. (Take g = 10 m/s2)

Ex.23 A body of mass `m' was slowly hauled up the hill as shown in the figure by a force F which at each point was directed along a tangent to the trajectory. Find the work performed by this force, if the height of the hill is h, the length of its base is l and the coefficient of friction is m.

12. PowerPower is defined as the time rate of doing work.When the time taken to complete a given amount of work is important, we measure the power of the agent doing work.

The average power  delivered by an agent is given by

where DW is the amount of work done in time Dt.

Power is the ratio of two scalars-work and time. So, power is a scalar quantity. If time taken to complete a given amount of work is more, then power is less.

The instantaneous power is, P =  where dW is the work done by a force  in a small time dt.

By definition of dot product,P = Fvcosθwhere q is the smaller angle between and This P is called as instantaneous power if dt is very small.

Ex.24 A one kilowatt motor pumps out water from a well 10 metre deep. Calculate the quantity of water pumped out per second.

Ex.25 The blades of a windmill sweep out a circle of area A. (a) If the wind flows at a velocity v perpendicular to the circle, what is the mass of the air passing through in time t? (b) What is the kinetic energy or the air? (c) Assume that the windmill converts 25% of the wind's energy into electrical energy, and that A = 30m2, v = 36 km h-1 and the density of air is 1.2 kg m-3. What is the electrical power produced?

Sol. (a) Volume of wind flowing per second = Av

Ex.26 One coolie takes one minute to raise a box through a height of 2 metre. Another one takes 30 second for the same job and does the same amount of work. Which one of the two has greater power and which one uses greater energy?

So, the power of the second coolie is double that of the first. Both the coolies spend the same amount of energy.

We know that W = PtFor the same work,

We know that W = Pt For the same work,

13. Vertical Circular MotionTo understand this consider the motion of a small body (say stone) tied to a string and whirled in a vertical circle. 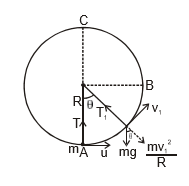 During the motion of the body from A to B.

q will increase so cosθ will decrease.

Due to which mg cosθ will decrease. From A to B speed of the body also decreases due to which decreases. Therefore tenstion in the string decreases from A to B.

But due to mg cosθ tension can never be zero.

speed decreases due to which

9 decreases due to which mg cos 9 increases. Therefore from B → C. Tension in the string decreases.

String slacks at a point where

13.1 Minimum velocity at point A for which body can complete the vertical circle

The condition for the body to complete the vertical circle is that the string should be taut all the time i.e. the tension is greater than zero.

So the body can complete the vertical circle if the tension is not zero in between the region B to C.

Apply energy conservation from A to C then

body can complete vertical circle, when It the velocity is greater than equal to

then the body will complete the vertical circle.

energy conservation from A to B

Let us calculate the umin such that the body just reaches B.Work done by tension = 0Only gravitational force is working on the body which is a conservative force. Therefore Applying conservation of energy, we get

then the body will oscillate about A.

If the velocity of projection is greater than

, the particle rises above the horizontal diameter and the tension vanishes before reaching the highest point.

We have seen that the tension in the string at the highest point is lower than the tension at the lowest point.

At the point D, the string OD makes an angle f with the vertical. The radial component of the weight is mg cos f towards the centre O.

Substituting in equation (i),

This equation shows that the tension becomes zero, if

If the tension is not to become zero.

Equation (ii) gives the values of $ at which the string becomes slack.

It is the angle from the vertical at which tension in the string vanishes to zero. And after that its motion is projectile.

13.4 Tension in the string versus q

The weight mg is resolved radially and tangentially.

, where v is the velocity at C,

The total energy at

The kinetic energy at The total energy at

∴ From conservation of energy

13.5 Different situations:(A) A BODY MOVING INSIDE A HOLLOW TUBE OR SPHERE

for the body to complete the circle holds for this case also. All other equations (can be) similarly obtained by replacing tension T by normal reaction N.

Therefore, if the speed of the body becomes zero before the highest point C. It's motion will be oscillatory about the centre of the rod.

Condition for completing the circle:If the body just reaches the highest point then it will completes the vertical circle

Applying energy conservation between the lowest and highest point of circle, we get

So, If the velocity at point A is greater than equal to  then body will compete the vertical circle.

This system will behave as the preivious system. So umin to complete vertical circle

The small body of mass m is placed on the top of a smooth sphere of radius R and the body slides down the surface.

At any instant, i.e., at point C the forces are the normal reaction N and the weight mg. The radial component of the weight is mgcos f acting towards the centre. The centripetal force is

The body flies off'the surface at the point where N becomes zero.

To find v, we use conservation of energy

From equation (ii) and (iii) we get

This gives the angle at which the body goes of the surface. The height from the ground of that point AD = R(1 + cos φ)