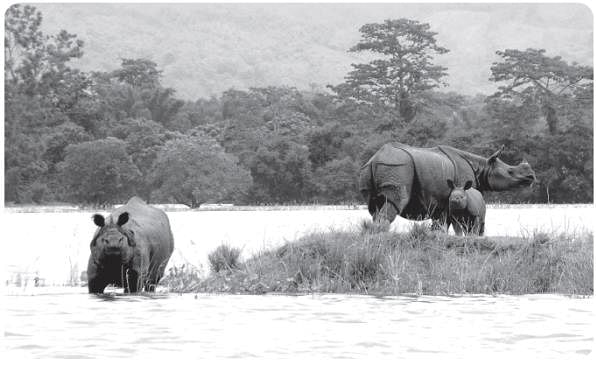 Kaziranga National Park in Assam is the home of the Asian One-horned Rhino. Two-thirds of the world’s population of this rhino are found in Kaziranga. Kaziranga, which was formed into a National Park in 1908, has been declared a UNESCO World Heritage Site in 1985. To catch a glimpse of the rhinoceros, we have to drive slowly through the wildlife sanctuary. There are signs put up by the Forest Department that tell us to drive slowly.  We must sometimes park the vehicle and wait quietly and patiently for the animals to appear.

If we are lucky, a rhino will come along, munching the grass and walking with heavy steps in the jungle. Sometimes there are other animals following them, such as a whole herd of barasinga, the antelopes whose beautiful stags have antlers with twelve branches.

Now the rhinos are often seen even in the fields along the National Highway to the sanctuary. The wildlife reserve is beautiful. It has swamps and great patches of tall elephant grass. Further into it is the dense forest full of its rich wildlife, often visible as they go walking around silently while we drive through. We can take photographs as we watch them. They walk along the National Highway which lies on their path towards the Kabini Hills. They need to use the Highway when there are floods in the monsoons as the waters of the mighty Brahmaputra river spill into the sanctuary.Apart from the rhinos, Kaziranga has increased the population of elephants, wild water buffalo, swamp deer and also of the tiger. Kaziranga was declared a Tiger Reserve in 2006. It is also identified as an Important Bird Area by Bird Life International for the conservation of water birds, like some species of goose, duck, stork, and many other migrating birds too.