Square(c) The clock time at which the hands of a clock forms an acute angle is ____Ans. 2’O Clock(d) Two times of a right angle is ____Ans. 180 degree or straight line.(e) ____ is used to measure an angle.Ans. Protractor(f) Draw a clock showing the time 3’O clock and write the angle indicated on the clock face.Ans. 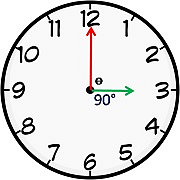 (i) Draw an acute angle and name it.Ans.

(j) Draw the positions of the hands of a clock at the given time and write the name of the angle thus formed Time: 2’O ClockAns.