Give two examples of the following.

Question 2: Which of the following is an adaptive feature of a penguin?(a) Strong legs(b) Thick skin(c) Gills(d) Fur on body

The wing and breast muscles are well developed, to propel penguins through water - a medium much denser than air. Having solid, dense bones helps penguins overcome buoyancy.

Cows are domesticated cattle and they can survive in a variety of habitats including the grasslands and other habitats where they have enough vegetation to eat.

Arboreal animals are those animals that spend most of their life on trees. They feed, travel, play, and sleep on trees.

Omnivores, because they eat both meat and plants, have a combination of sharp front teeth and molars for grinding.

Read the clues and guess the answers. Answer the following questions in brief.

Question 10: What are terrestrial animals?

Camouflage is a phenomenon in which an animal's body colour merges or blends with their surroundings. This makes it very difficult for the enemy to spot. The chameleon, a lizard-like animal, can also change the color of their skins to match their surroundings.Crypsis is a form of camouflage that helps animals avoid being seen at all. The arctic fox uses crypsis to hide from predators like polar bears, and to also sneak up on its favorite prey-lemmings.

Question 12: Explain some adaptations in animals living in Polar Regions.

Animals in polar regions have adapted to survive in these extreme conditions. They have thick fur or feathers, blend in with the white snow, or hibernate during the coldest winter months.

Most birds can fly and so even though they live on trees like arboreal animals, they are aerial animals.

Question 14: What is migration? Name any three animals that migrate from their original place.

Movement of animals from one region to another to adapt to climatic conditions and to breed well is termed Migration.

Question 15: Look on the Internet and write the reason for the following adaptations in a polar bear. 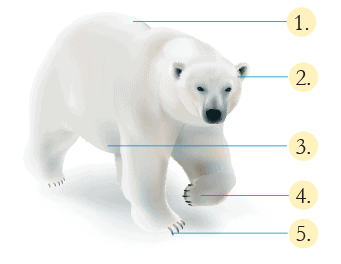