Correct answer is option C.North, east, south, and west are the four cardinal directions, often marked by the initials N, E, S, and W. East and west are at right angles to north and south. East is in the clockwise direction of rotation from north. West is directly opposite east.

Correct Answer is Option B.

Correct Answer is Option B.

The Tropic of Cancer lies at (23.4394 degrees) north of the Equator and marks the most northerly latitude at which the sun can appear directly overhead at noon.

Give one word answer to the followingQuestion 7: What is a book of maps called?

An atlas is a book or collection of maps. A map book is a collection of pages printed or exported together. Many of the pages contain maps, but other pages may be dedicated to text, tabular information, tables of contents, or title pages, and other content.

Question 8: What is the shape of the earth?

The Earth is an irregularly shaped ellipsoid. While the Earth appears to be round when viewed from the vantage point of space, it is actually closer to an ellipsoid.

Map scale refers to the relationship (or ratio) between distance on a map and the corresponding distance on the ground.

Question 10: What is the model of an earth called?

Maps and globes are models of the Earth's surface. Globes are the most accurate representations because they are spherical like the Earth. We cannot see the Earth all of it at once as it is so large. So, globe helps us to see what the whole Earth looks like. A globe is better representation of earth in comparison to a flat map.

Short answer type questionsQuestion 11: Which are the four major directions?

North, east, south, and west are the four cardinal directions, often marked by the initials N, E, S, and W. East and west are at right angles to north and south.

Question 12: Which are the important latitudes?

Question 13: What is the main feature of a map?

Some common features of maps include scale, symbols, and grids. All maps are scale models of reality. A map's scale indicates the relationship between the distances on the map and the actual distances on Earth.

Question 14: Write the features and limitations of a globe.

A globe is a spherical model of Earth, of some other celestial body, or of the celestial sphere. Globes serve purposes similar to some maps, but unlike maps, do not distort the surface that they portray except to scale it down. A model globe of Earth is called a terrestrial globe.The limitations of a globe are:

Longitude is the measurement east or west of the prime meridian. Longitude is measured by imaginary lines that run around the Earth vertically (up and down) and meet at the North and South Poles. These lines are known as meridians.

(b) Eastern and Western Hemispheres

The Western Hemisphere is a geographical term for the half of Earth which lies west of the prime meridian (which crosses Greenwich, London, United Kingdom) and east of the antimeridian. The other half is called the Eastern Hemisphere. 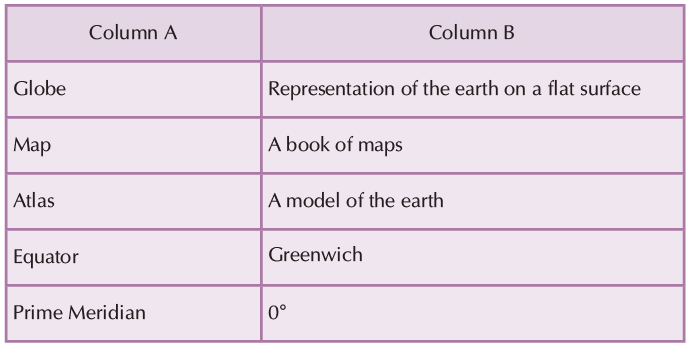