Q.1 Match the pictures of the animals on the right with their description on the left. 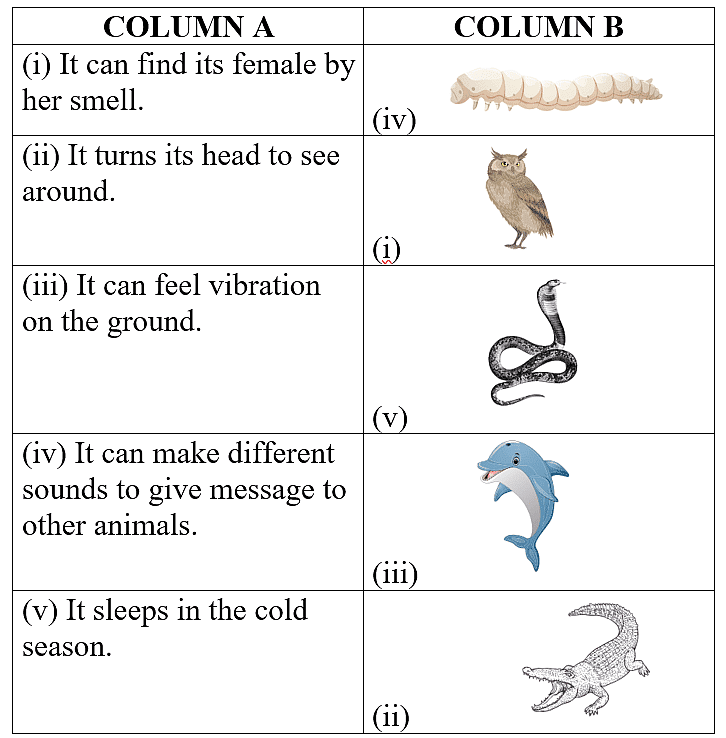 Q.2.  Choose the correct answer to fill in the blanks.

(z) ScentQ.3. Many animals are killed, and their parts are sold. Match the animals with the part for which they are killed.

Q.4. Write ‘True’ for the correct statement and ‘False’ for the wrong statement.

(e) Animals like Black Mamba, Elephants, dogs, and some birds

(l) OwlQ.7. One Mark Questions. (Short answer questions)I. (a) Because a dog has the ability to hear a very slight noise and he can feel the vibration made by the foot of the man.(b) Because they have a high sense of smell.(c) Eagle has also very good eyesight.(d) Because they follow the scent left behind by the leader.(e) They sense the heat which is released from our body and locate us even in a dark room.

II. (a) Lizards are not seen in the winter season because, being a cold-blooded animal.(b) Endangered animals are animals that are in danger of becoming extinct. (c) Poaching is the illegal hunting, killing or capturing of animals.(d) People kill animals for their body parts like skin, musk, horns and tusks. (e) The biggest threat to tigers is from hunters and poachers who kill them for their skin.

Q.8. Two Mark questions. (Long answer questions)I. (a) Ants recognize their friends because they have strong ability to smell. They know each other's smell. The smell is of a hormone released by ants called Pheromone.(b) A part of your body (such as your eyes, ears, nose, skin or tongue) that you use to see, hear, smell, taste, or feel things.There are 5 sense organs. Eyes to see, ears to hear, nose to smell, tongue to taste, and skin sense of touch.(c) Dogs usually urinate on the roads to remember its path whenever it finds new things on its path like tires street lights it also urinate on the to remember that these things will come on its path.(d) They have bigger eyes they can't move their eyeballs so to have a look on both the side birds move their neck very often. Another reason for this is they have more number of bones in their neck so the neck is very flexible and can do fast movements.(e) Birds with eyes on the sides of their heads have a wide visual field, useful for detecting predators, while those with eyes on the front of their heads, such as owls, have binocular vision and can estimate distances when hunting.(f) The vibrations pass through the skin and muscles of the snake to a bone connected to its inner ear, from this bone the vibrations pass to the inner ear, which "hears" them.(g) The steps include, The "Indian Wildlife Act" was initiated by the government in 1972 for wildlife protection. This act banned "hunting and poaching" of animals providing legal protection to wildlife.

II. Answer the following questions on tiger.(a) The reflective layer at the back of their retina reflects the small amount of light and make it clear to see.(b) It uses the smell of the scent of unfamiliar tiger. (c) Tigers can hear small sounds as it has whiskers and hair at ears.

The document Worksheet Solution: Super Senses Notes | Study EVS Class 5 - Class 5 is a part of the Class 5 Course EVS Class 5.
All you need of Class 5 at this link: Class 5
Join Course