(a) The Island with an active volcano.

Barren Island is an island located in the Andaman Sea. It is the only confirmed active volcano in the Indian subcontinent.

(b) The sea port in India nearest to Sri Lanka.

(c) The important sea port of the Kerala State.

Cochin Port is the only major port in Kerala. It spreads over 827 hectares. It has a water frontage of 7.5 Km. The port has connectivity to the hinterland through NH 47, NH 17 and NH 49.

(d) The place which is the meeting point of the two coastal strips.

The two coastal strips that flank the Peninsular plateau are

(e) The State that has lagoons.

State of Odisha, Chilika is the largest coastal lagoon in India and the second-largest lagoon in the world.

(a) Which occupation is popular among people living by the sea-side?

Lagoon is defined as a shallow body of water separated from the ocean or from larger bodies of water by a reef or other barrier. Chilika is the largest coastal lagoon in India and the second-largest lagoon in the world.

(c) Which of the two group of Islands are farther from the main land?

The 2 islands which are farther from the mainland of India are: 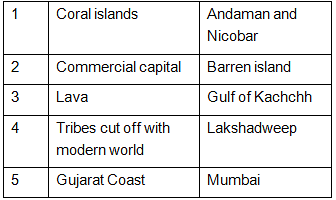 Lakshadweep is formed from the skeletons of these polyps, called corals. These coral islands were formed due to the accumulation of corals on the volcanic tops of the ridge of the Indian Ocean, which then sank below the surface many millions of years ago supposedly because of a rise in sea levels.

Mumbai is the commercial capital of India and has evolved into a global financial hub.

Barren Island is an island located in the Andaman Sea. It is the only confirmed active volcano in the Indian subcontinent.

Tribes cut off from the modern world - Andaman and nicobar island.

The 2 islands which are farther from the mainland of India are:

The Gulf of Kutch divides the Kutch and the Kathiawar peninsula regions in the state of Gujarat.

Question 5: From the map of the Coastal Plains