Weather, state of the atmosphere at a particular place during a short period of time. It involves such atmospheric phenomena as temperature, humidity, precipitation (type and amount), air pressure, wind, and cloud cover.

The rays of the Sun can reach only half of the Earth's surface at one time. The sun's rays extend to the North and South Poles equally only twice during the year, on September 23 and March 21. On these two days, the vertical rays of the Sun fall directly on the Equator. From September 23 to December 21, the Sun's rays gradually extend a few degrees beyond the South pole and recede from the North Pole. On December 21, the rays extend 23 1/2 beyond the South Pole and fail to reach the North Pole by the same number of degrees. At this time, the area surrounding the South Pole known as the Antarctic Circle receives sunlight and the Arctic Circle, surrounding the North Pole, is without sunlight.

Question 4: It is hot and humid throughout the year in the(a) Temperate Zone(b) Torrid Zone(c) Frigid Zone(d) mountains

We can divide the Earth into three heat zones on the basis of the difference in their temperature. Tropic of Cancer and the Tropic of Capricorn. The climate here is hot and humid throughout the year. are called the Temperate Zones.

Question 6: Why do places near the Equator receive more heat than those near the poles?

Question 7: Why does Chennai have a moderate climate?

Chennai features tropical wet and dry climate. Its nearest central position is the main reason for the moderate climate.

Question 8: Describe the climatic conditions of each heat zone. 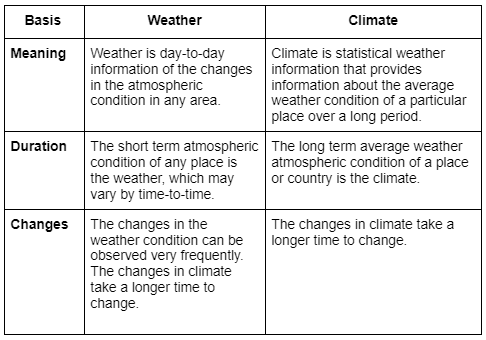 (b) moderate climate and extreme climate.

Question 10: How do winds influence the climate of a place?

Think and answerQuestion 11: Shimla and Ludhiana are almost at the same distance from the Equator. Then, why is Shimla much colder than Ludhiana?