Question 1: Guess the words by looking at their mirror images:

Question 2: Complete the following figures such that the dotted lines p and q are the lines of symmetry of the total new figures:

Question 3: Here is a figure of an angle PQR and a mirror line l. Draw mirror image of ∠PQR. Do you find that the resulting image has the same measure?

Question 4: A cube is cut into two pieces by the plane through P,Q,R and S as shown in the figure. Sketch the section. 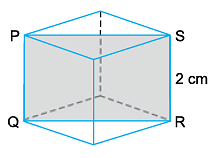 Question 5: How many planes of symmetry does this cuboid have?

Question 6: A cricket ball is cut by a plane passing through the centre. Draw the section.Question 7: Draw the shape of the section given by slicing down through the middle of each of the following solids.

Question 8: How many planes of symmetry does this cube have? 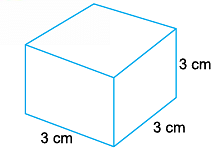 Question 10: Which letters of English alphabet have a rotational symmetry?Question 11: Separate the letters of the word MOTHERLAND which have:

Question 17: Complete these letters from their halves:

Question 18: Find out which letters of English alphabet are symmetrical:

Question 19: Identify which of the following figures are symmetrical. In case of symmetrical figure, draw the line(s) of symmetry:

Question 20: A cylinder is cut by a plane as shown in the figure. Draw the section.