o According to the support and boundary conditions» Choice of slab type» Limit analysis – Yield Line Theoryo Ductility and Yield Line Theoryo Yield Line Analysis: Yield line theory permits prediction of the ultimate load of a slab system by postulating a collapse mechanism which is compatible with the boundary conditions. Slab sections are assumed to be ductile enough to allow plastic rotation to occur at critical section along yield lines.1. Postulate a collapse mechanism compatible with the boundary conditions2. Moment at plastic hinge lines ≈ Ultimate moment of resistance of the sections3. Determine the ultimate load4. Redistributions of bending moments are necessary with plastic rotations.o Moment-curvature relationship– Curvature ductility factor:

– εE <<ε Plastic – Mu ≈ constant at yield lines.o Determinate structures → mechanismo Indeterminate structures – moment redistributiono Assumptions and guidelines for establishing axes of rotation and yield lineso Determination of the ultimate load (or moment):– Equilibrium method– Analysis by Principle of Virtual Work» Isotropic and orthotropic slabso Isotropic slabs A slab is said to be isotropically reinforced if it is reinforced identically in orthogonal directions and its ultimate resisting moment is the same in these two directions as it is along any line regardless of its direction.o Orthotropic slabs A slab is said to be orthotropically reinforced if its ultimate strengths are different in two perpendicular directions. In such cases, yield lines will occur across these orthogonal directions.o Determination of the moment capacity Mu for orthotropic slabsComputation for the moment capacity Mu consistent with the yield line given the moment capacities Mx and My in the direction of the reinforcing bars: 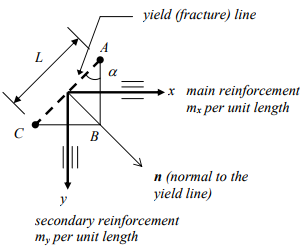 Square yield criterion (isotropic reinforcement)if mx ≠ my, thenorthogonally anisotropic or orthotropicOrthotropic slabs can be reduced to equivalent isotropic cases by modifying the slab dimensions.Buyukozturk Outline 11 In analyzing orthotropic plates it is usually easier to deal separately with the x and y direction components of the internal work done by the ultimate moments:

» Upper-Bound Solution (Energy Approach)o Energy method, with an initial selection of a collapse mechanism, gives an upper bound solution, i.e., if failure mode (mechanism) is chosen incorrectly (still satisfying boundary condition) the solution for the ultimate load will be unconservative. The method involves:• Select a failure (collapse) mechanism which satisfies the displacement boundary conditions everywhere (kinematic admissibility), and which satisfies the yield criterion at the yield line.• Impose the condition that work done by the external loads must equal the work done by the resisting forces.• If the correct mechanism is chosen the method leads to the correct value, otherwise, the predicted load is unconservative.• This is explained with the following example: A fixed ended beam has a positive and negative moment capacity of Mu . Assume the following collapse mechanism,

The correct collapse load is found for

For any other value of λ < 0.5, Pu is unconservative.» Comments on yield line theory:1. In the equilibrium method, equilibrium of each individual segment of the yield pattern under the action of its bending and torsional moments, shear forces and external loads is considered.2. In the virtual work method, shear force and torsional moment magnitudes and distribution need not be known because they do not work when summed over the whole slab when the yield line pattern is given a small displacement.» Limitations on yield line theory:1. Analysis is based on rotation capacity at the yield line, i.e., lightly reinforced slabs.2. The theory focuses attention on the moment capacity of the slab. It is assumed an earlier failure would not occur due to shear, bond, etc.3. The theory does not give any information on stresses, deflections, or service load conditions.