The document Zeroes and Poles in Complex Analysis - Mathematical Methods of Physics, UGC - NET Physics Physics Notes | EduRev is a part of the Physics Course Physics for IIT JAM, UGC - NET, CSIR NET.
All you need of Physics at this link: Physics

If f is a function that is meromorphic in a neighbourhood of a point z0 of the complex plane, then there exists an integer n such that

is holomorphic and nonzero in a neighbourhood of z0 (this is a consequence of the analytic property). If n > 0, then z0 is a zero of order (or multiplicity) n. Sometimes the term order of vanishing is interchangeably used. If n < 0, then z0 is a pole of order |n|. Simple zero and simple pole are terms used for zeroes and poles of order |n| = 0. Degree is sometimes used synonymously to order.

This characterization of zeros and poles implies that zeros and poles are isolated, that is, every zero or pole has a neighbourhood that does not contain any other zero and pole.

A meromorphic function may have infinitely many zeros and poles. This is the case for the Gamma function (see the image in the info box), which is meromorphic in the whole complex plane, and has a simple pole at every non-positive integer. The Riemann zeta function is also meromorphic in the whole complex plane, with a single pole of order 1 at z = 1. It has no zeros in the left halfplane besides at all even integers along the negative real line, and the Riemann hypothesis is the conjecture that all other zeros are along Re(z) = 1/2.

In a neighbourhood of a point z0 a nonzero meromorphic function f is the sum of a Laurent series with at most finite principal part (the terms with negative index values):

exists and is a nonzero complex number.

The complex plane extended by a point at infinity is called the Riemann sphere.

Every rational function is meromorphic on the whole Riemann sphere, and, in this case, the sum of orders of the zeros or of the poles is the maximum of the degrees of the numerator and the denominator. 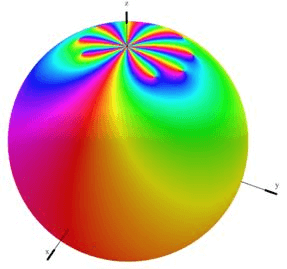 is meromorphic on the whole Riemann sphere. It has a pole of order 1 or simple pole at z = 0, and a simple zero at infinity.

is meromorphic in the whole complex plane, but not at infinity. It has poles of order

. This can be seen by writing the Taylor series of ez around the origin.

has a single pole at infinity of order 1, and a single zero at the origin.

All above examples except for the third are rational functions. For a general discussion of zeros and poles of such functions, see Pole–zero plot § Continuous-time systems.

Function on a curve

The concept of zeros and poles extends naturally to functions on a complex curve, that is complex analytic manifold of dimension one (over the complex numbers). The simplest examples of such curves are the complex plane and the Riemann surface. This extension is done by transferring structures and properties through charts, which are analytic isomorphisms.