The document D- block elements Class 12 Notes | EduRev is a part of Class 12 category.
All you need of Class 12 at this link: Class 12

The elements in which last electron enters in d-orbital of penultimate Shell i.s. (n-1)d orbital are called as d-block elements. 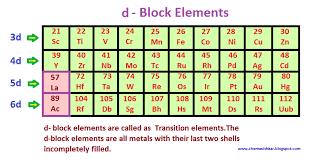 Transition Elements:-
The elements in which last electron enters in (n -1)d subshell and they having in completely filled (n -1)d subshell in their elementary state or common Oxidation state are called as transition elements.

1) All are metals and shows metallic properties like malleability,  ductility, Luster, etc.

2) They are good conductor of heat and electricity.

4) They having catalytic property.

5) They having high densities.

6) They having high melting point and boiling point.

8)  They have tendency to form coloured compounds.