Two bodies M and N of equal masses are suspended from two separate massless springs of spring constants k1 and k2 respectively. If the two bodies oscillate vertically such that their maximum velocities are equal, the ratio of the amplitude of vibration of M to that of N is

Both the bodies oscillate in simple harmonic motion, for which the maximum velocities will be

Let us plot the graph of the mathematical equation

From the graph it is clear that the potential energy is minimum at x =  0. Therefore, x = 0 is the state of stable equilibrium. Now if we displace the particle from x = 0 then for displacements the particle tends to regain the position x = 0 with a force

Therefore for small
values of x we have F ∝ x.

The period of oscillation of a simple pendulum of length L suspended from the roof of a vehicle which moves without friction down an inclined plane of inclination α , is given by

As shown in the figure, gsina is the pseudo acceleration applied by the observer in the accelerated frame 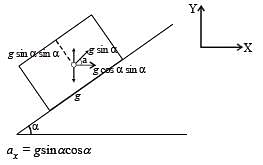 NOTE : Whenever point of suspension is accelerating
use

The velocity of a body executing S.H.M. is maximum at its centre and decreases as the body proceeds to the extremes. Therefore if the time taken for the body to go from O to A/2 is T1 and to go from A/2 to A is T2 then obviously T1 < T2

For a particle executing SHM the displacement x is given by x = A coswt. Identify the graph which represents the variation of potential energy (PE) as a function of time t and displacement x

A simple pendulum has time period T1. The point of suspension is now moved upward according to the relation y = Kt2, (K = 1 m/s2) where y is the vertical displacement. The time period now becomes T2. The ratio of

The x-t graph of a particle undergoing simple harmonic motion is shown below. The acceleration of the particle at t = 4 / 3 s is

From the graph it is clear that the amplitude is 1 cm and the time period is 8 second. Therefore the equation for the S.H.M. is

The acceleration of the particle is

A uniform rod of length L  and mass M is pivoted at the centre. Its two ends are attached to two springs of equal spring constants k. The springs are fixed to rigid supports as shown in the figure, and the rod is free to oscillate in the horizontal plane.
The rod is gently pushed through a small angle θ in one direction and released. The frequency of oscillation is

Figure shows the rod at an angle θ with respect to its equilibrium position. Both the springs are stretched by length

Comparing it with the standard equation of rotational SHM we get

The mass M shown in the figure oscillates in simple harmonic motion with amplitude A. The amplitude of the point P is

A point mass is subjected to two simultaneous sinusoidal displacements in x-direction, x1(t) = A sin wt and x2(t) =

Adding a third sinusoidal displacement x3(t) = B sin (ωt + φ) brings the mass to a complete rest. The values of B and φ are

Two sinusoidal displacements have amplitude A each, with a phase difference of

It is given that sinusoidal displacement x3(t) brings the mass to a complete rest. This is possible when the amplitude of third is A and is having a phase difference of

with
respect to x1 (t) as shown in the figure.

A small block is connected to one end of a massless spring of un-stretched length 4.9 m. The other end of the spring (see the figure) is fixed. The system lies on a horizontal frictionless surface. The block is stretched by 0.2 m and released from rest at t = 0. It then executes simple harmonic motion with angular frequency ω = π/3 rad/s. Simultaneously at t = 0, a small pebble is projected with speed v form point P at an angle of 45° as shown in the figure. Point P is at a horizontal distance of 10 m from O. If the pebble hits the block at t = 1 s, the value of v is (take g = 10 m/s2)