Who suggested that if we go on dividing matter, a stage will come when particles obtained can’t be divided further?

Democritus and Leucippus suggested that if we go dividing matter, a stage will come when particles obtain can’t be divided further.

Detailed Solution for HOTS Questions: Atoms and Molecules - Question 3 The chemical formula can tell you the amount of each individual element that makes up that compound. Usually, they are derived by mass, so if you multiply the subscript number by the elemental mass of the number preceding, you can find how much of that element is in that compound.

One mole of N2 is equal to-

Atom of Hydrogen is

The diameter of Hydrogen atom is 10−10m. it is the smallest atom among all elemetns. 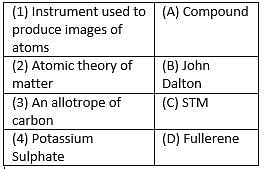 STM ( scanning tunneling microscope)  is  an instrument for Imaging surfaces at the atomic level.
John Dalton gave the Atomic theory of Matter.
Fullerene is an Allotrope of carbon.
Potassium sulphate is a compound.

How many moles are present in 40 g of He?

Who was the first to use the symbols for elements?

Dalton was the first scientists who use the symbols for elements. The modern symbols are different from symbol proposed by Dalton.

The correct answer is B as  all the statements of option c and d are true about dalton's theory .

Which of the following elements are present in Quick lime?

Mole is also known as chemist dozen. The mass of one twelfth of the mass of one atom of carbon taken as 1u. So, both the statements are correct.

What is the Latin name of Potassium?

Latin name of Potassium element is Natrium from which symbol of Sodium is derived as Na.

During a chemical reaction, the sum of the masses of the reactants and products remains unchanged. This is known as

Law of conservation of mass states that, during chemical reaction, the sum of the masses of the reactants and products remains unchanged.

What is the formula of calcium phosphide?

Chemical formula of Calcium phosphide is Ca3P2. Valency of Calcium is 2 and Phosphate is 3.

How many molecules are present in one gram molecular mass of a substance?

The number of molecules present in one gram molecular mass of a substance is 6.022 × 1023 molecules called as Avogadro number.

How many atoms are present in PO4−3ion?

There are 5 atoms in the given ion, in which 1 atom is of Potassium and 4 atoms of Oxygen.

Statement A: Atoms can exist independently
Statement B: The law of constant proportions is applicable only to pure chemical compounds.
Which of the two Statements is true?

An atom cannot exist independently. The law of constant proportions is applicable only to pure chemical compounds. So, only statement B is correct.

What is the mass of 0.5 mole of Hydrogen atom

What is the name given to the short hand representation of an element?

Which postulates of Dalton’s atomic theory is the basis of the law of conservation of mass?

The Dalton’s postulates that Atoms can neither be created nor destroyed are the basis of law of conservation of masses.

How many moles are present in 2.3 g of Na

What is the latin name of sodium?

Latin name of sodium is Natrium. Therefore, symbol of Sodium is Na.