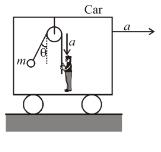 A man is standing on a spring balance platform. Reading of balance is 60 kg wt. If the man jumps outside the platform, then the reading of the balance :

The man will first press the platform to get extra normal force required for the jump. Hence initially the reading will be greater than 60 kg wt and then decrease to zero.

The correct answer is: Becomes > 60 kg-wt initially and then decreases to zero

The elevator shown in figure is descending, with an acceleration of 2m/s2. The mass of block A is 0.5 kg. The force exerted by block A on block B is (mass of block B is 1 kg)

In the figure shown, a person wants to raise a block lying on the ground to a height h. In both the cases if time required is same then in which case he has to exert more force. Assume pulleys and strings light.(let F1 be force in (i) and F2 be force in (ii)) 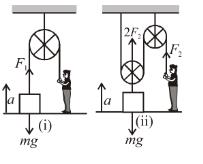 The correct answer is: (i)

A spring of negligible mass going over a clamped pulley of mass  m  supports a block of mass M as shown in the figure. The force on the pulley by the clamp at the time of equilibrium is given by

Free body diagram of pulley is shown in figure. Pulley is equilibrium under four forces. Three forces as shown in figure and the fourth, which is equal and opposite to the resultant of these three forces, in the force applied by the clamp on the pulley (say F).

From the F.B.D we obtain

Therefore, the force F is equal and opposite of R as shown in figure.

A uniform rope of length L and mass M is placed on a smooth fixed wedge as shown. Both ends of rope are at same horizontal level. The rope is initially released from rest, then the magnitude of initial acceleration of rope is

The correct answer is: 0

Let us assume that the block A of mass m is tied to the spring. However at t=0s, the spring is not compressed or extended.

Let T be the tension in the string going over pulley.   Just after releasing the force on block A, both blocks move with the same acceleration. The tension is same in the rope on both sides.  The equations of motion for both blocks are:

Two particles of mass m  each are tied at the ends of a light string of length 2a. The whole system is kept on a frictionless horizontal surface with the string held light so that each mass is at a distance a from the centre P (as shown in the figure). Now, the mid point of the string is pulled vertically upwards with a small but constant force F. As a result, the particles move towards each other on the surface. The magnitude of acceleration, when the separation between them becomes 2x, is : 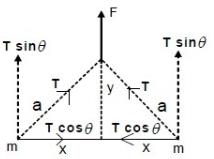 Putting in the values and solving we get

Putting in the value of cotθ as

we have the option C as the correct one.

A person is standing in an elevator. The situation in which he finds his weight less than actual is?

Reason: Newton's third law of motion.  If a body exerts a force on another, there is an equal and opposite force called a reaction on the first body by the second. In Downward moving elevator (with a uniform acceleration), the man experiences an upward force. This reduces his weight.
In case of uniform velocity, Force= mas x acceleration is zero since acceleration is zero.

Block of mass  M1 and M2  are connected by a cord which passes over the pulleys P1 and P2 as shown in the figure. If there is no friction, the acceleration of the block of mass M2 will be :