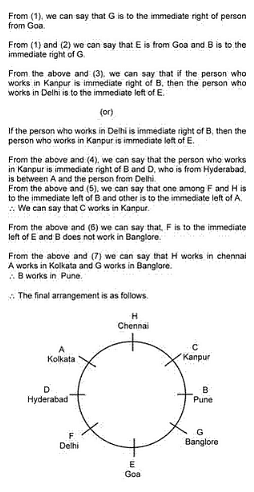 Who is second to the left of the person from Hyderabad?

Who is seated opposite C?

Which of the following combinations is correct?

A,B,C,D,E,F,G,H, eight members of a family sit around a circular table. The following information is known about them: There are three married couples in the family. E is third to the right of B, and exactly two persons sit between G and E. C is to the right of his grandson. F is the son-in-law of D and his daughter is A who sits to the left of her aunt E, who is opposite D. G and E are sisters-in-laws. H is unmarried, while F has no siblings. Each couple has at least one child.

Who is wife of B? 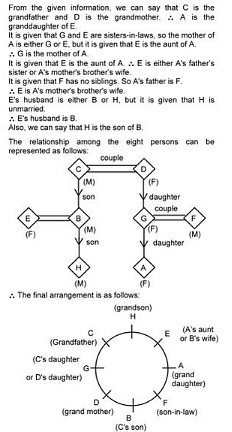 _______persons are sitting between D and the person from Mechanical?

______sits opposite the person from Biotechnology.

Four out of the following five are alike in a certain way based on the given information and so form a group. Find the one which does not belong to that group?

Which of the following is true ?

Name the boy who is not industrious and is average in studies.