Arrange the following organisations in chronologicalorder:

Choose the answer from the codes given below:

In 1831, Dwarkanath Tagore had established the “Landholders Society” along with Prasanna Kumar Tagore, Radhakanta Deb, Ramkamal Sen and Bhabani Charan Charan Mitra. It was followed by British India Society in 1839. Then the Madras Native Association was formed in 1852. The British Indian Association was established on 31 October 1851. Its formation was a major event of 19th century India.  After this The East India Association was founded by Dadabhai Naoroji in 1866, in collaboration with Indians and retired British.

Arrange the following events in the correct chronologicalorder:

(1) Repeal of the Vernacular Press Act.

(2) Appointment of the first Famine Commission

(3) Passing of the Ilbert Bill

Match List-I with List-II and select the answer from the codes given below the lists: 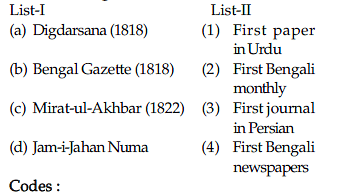 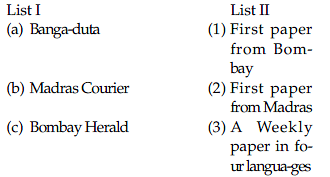 Which code gives the correct matching of the following lists? 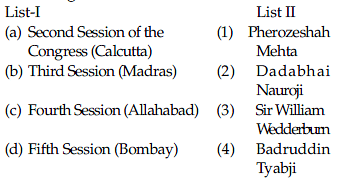 Match List-I with List-II and choose the answer from the codes given below the lists: 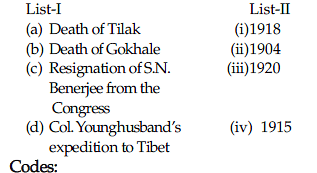 Which of the following statements is/are not true about the Non-Cooperation and Khilafat Movement?
(i) At the Vijayawada session of the AICC (April, 1921), the “Tilak Swaraj Fund” was started to finance the Non-Cooperation Movement.
(ii) At the same session, it was decided to enroll one crore members in the Congress by the end of June 1921.

(iii) At the Karachi Khilafat Conference in July 1921 the Ali brothers called on the Muslims to resign from the army, and hence they were jailed by the British in November, 1921.
(iv) Some Khilafat members like Hasrat Mohani began demanding complete independence by the end of 1921.
(v) The Jamia Millia Islamia was started in Delhi in 1921.

The correct option is C.
Jamia Millia Islamia is a Central University located in Jamia Nagar, New Delhi, India.Originally established at Aligarh, United Provinces (present day Uttar Pradesh, India) during the British Raj in 1920, it moved to its current location in Okhla in 1935. It was given the deemed status by University Grants Commission in 1962. On 26 December 1988, it became a central university.

Which of the following clauses was/were not included in the Gandhi-Irwin Pact?
(i) Withdrawing all ordinances and ending prosecutions;
(ii) Release of all kinds of political prisoners;
(iii) Restoration of the confiscated property of the Satyagrahis;
(iv) Permitting peaceful picketing of liquor, opium and foreign cloth shops;
(v) Permitting all the Indians to collect or manufacture salt, free of duty.
Choose the answer from the codes given below:

Mahatma Gandhi met Lord Irwin on 17th February, 1931 and after the prolonged discussions, they came into an agreement. As per the terms of Gandhi – Irwin pact, the Indian National Congress agreed to withdraw the Civil disobedience movement and to participated in the second round table conference and the most important terms agreed by the British Indian Government.
1. To withdraw all the orders and the pending petition.
2. To release all the political prisoners except those who were guilty of violence.
3. To restore the confiscated properties of the satyagrahis.
4. The government agreed to permit the peaceful picketing of liquor, opium and foreign cloths shop.
5. Abolition of the Salt law and the monopoly of Salt making etc.

Which of the above are incorrectly matched & Choose the naswer from the codes below:

Match List I and List II and select the answer from the codes given below the lists: 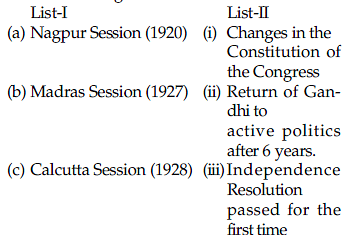 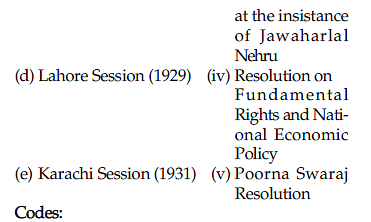 I.Suspension of the Non-Cooperation Movement:

The tragedy at Chauri Chaura, a village in Gorakhpur district in Uttar Pradesh, occurred on February 5, 1922. A procession of about 3,000 peasants marched to the police station to protest against the police officer who had beaten some volunteers picketing a liquor shop. The police fired at the peasants. This infuriated the demonstrators and they set the nearby police station on fire, killing 22 policemen who were inside the police station. There were a few violent incidents in other parts of the country. Gandhiji, a believer in 'Ahimsa' was greatly shocked at these incidents and he withdrew the Non-Cooperation Movement on February 12, 1922.

II.During the Madras Session in December 1927, young leaders like Jawahar Lal Nehru had proposed the resolution for complete independence which was however defeated and the action of Jawahar Lal was not appreciated by Gandhi.

III. Gandhi returned to active politics afters
Iv.The annual session of the Congress was held at Lahore 1929 where Jawaharlal Nehru was elected the president. As per the Poorna Swaraj resolution passed at the Lahore Congress the word Swaraj in the Congress Constitution would mean complete independence
v.The Congress met at Karachi in March 1931 to endorse the Gandhi-Irwin or the Delhi Pact.It was presided over by Sardar Patel. This session became memorable for its resolution on the Fundamental Rights and the National Economic Programs.In short , It set the parameters of the Swaraj was reflected the then dominant leftwing ting of the national movements.It was drafted by the Pandit Jawaharlal Nehru.

Arrange the following in the historical sequence:
(i) Escape of Subhas Chandra Bose from India;
(ii) Celebration of the “Deliverance Day” by the Muslim League;
(iii)Resignation of the Congress Ministries;
(iv) Lahore Resolution of the League demanding separate state for Muslims;
(v) “Quit India” Resolution by the Congress
Choose the correct answer from the codes below:

Which is the correct chronological order of the following events?

(ii) Formation of the Azad Hind Government at Singapore by S.C. Bose

(v) INA TrialsChoose the answer from the codes given below the lists:

Which is the correct sequence of the following events?

(i) Formation of the Interim Government by the Congress;

(v) Joining of the League in the Interin Government.

Arrange the following in the chronological order:

“Reserved Subjects” under the Dyarchy in the provinces were administered by the Governor and his Executive council. Which of the following were included in them?

(i) Law and order

In which of the following provinces was ‘Bicameralism’ introduced for the first time in 1935?

Choose the correct answer from the codes below:

The Government of India Act 1935 was an Act of the Parliament of the United Kingdom. It originally received Royal assent in August 1935. Until 1999, it was the longest Act of (British) Parliament ever enacted. Act led to- Bicameralism in 6 provinces (Bombay, Madras, Bengal, Bihar, Assam and United Provinces) out of 11 provinces.

Match List I with List II and select the answer from the codes given below the lists:

Find out the correct pairing of the following lists from the codes given below the lists:

Which code gives the correct pairing of the following lists?

Match List I with List II and select the correct answer using the codes given below the lists:

The correct option is D.
On December 17, 1927, Bhagat Singh and Shivaram Rajguru shot and killed assistant superintendent of police John Saunders.
Gopi Nath Saha shot dead another Englishman Mr. E. Day on 12 January, 1924. Later he was arrested and sentenced to death.
Dhingra shot Sir Curzon-Wyllie, an India Office official, at close range.
In Pune, it resulted in a completely different monument: one that commemorates the Chapekar brothers ( Damodar Hari , Balkrishna Hari and Vasudeo Hari) who killed WC Rand, an Indian Civil Service officer and the chairman of the Special Plague Committee.

What factors were responsible for the emergence of a common national outlook in India in the last quarter of the 19th century?

There were some immediate factors that led to the birth of the Indian National Congress in 1885. Which of the following was not one such factor?

The correct option is B.
Between the years 1870 and 1880, Indian people had become politically conscious and by the year 1885, there was a platform ready for establishment of a political organization on a national basis. The credit for giving a definite structure to the all India organization goes to a retired British officer A.O. Hume. He was a liberal minded person. Hume had been feeling a need for a political organization which would bridge the gap between the rulers and the people being ruled. Hume wanted the people to adopt the path of valid politics instead of violence and aggression. With the efforts of Mr. Hume, "Indian National Union" was formed.
Hume obtained the permission from Lord Dafrin to convene a meeting of "Indian national Union" between 25th December and 313st December in Pune. The objective of the meeting was to acquaint the work force with one another, which was working for the national development and define a political agenda for the development.
Although the place of convention was decided to be Pune, the venue was changed to Mumbai in the last minute. The convention was held at Mumbai on 28th December 1885 in Gokuldas Tejpal Sanskrit College. At the suggestion of Sir Hume the meeting was named "Indian national Congress" and thus, Indian National Congress was born. There were 72 representatives in this convention of the Indian National Congress. Vyomesh Chandra Benarjee was the president of the first convention of Indian National Congress.
The Objectives of establishment of Indian National Congress- Historians believe that, with the direction from British Government Huma and his colleagues had founded Indian National Congress as a protective shield for British Government. Hume did not want the people of India to adopt violent and aggressive measures to register their discontent and anger against British Rule. Hume wanted to encourage people to take a legitimate path of protest like-appeals, memorandum, delegations to influence the British Government, in order to fulfil the demands.
The leaders of Congress accepted the leadership of A.O. Hume in the foundation of Indian National Congress because they were not in the position of having an open conflict with the British Government in the existing circumstances. This was more sensible to cooperate with Hume, in order to have a common platform wherein they could discuss the problems of the country.

Which British viceroy helped intensify discontent against foreign rule by the early 1880’s?

Recial bitterness of the British was clearly seen in the passing of the Vernacular Press Act which gagged public opinion in India. This Act was passed in

Indians realized that the British wanted to monopolize the higher grades of services in the administration when the government reduced the maximum age limit for sitting in the l.C.S. examination from 21 years to 19 in

The character act of 1833 had provided for the holding of the competitive exams in London for thr recruitment to higher sevice under the company. Yhe british bureaucracy in india was opposed to the entry of Indians into the civil services. Lord Lytton was also one of the same and wanted to close the doors of convenanted services to the indian altogether. Having failed to do so he took steps calculated to discourage Indians from competing for the said examination by lowering te maximum age from 21 to 19 years in 1878.

The llbert Bill controversy came up during the viceroyalty of

In 1838, to protect the interests of the landlords, the Zamindary Association (popularly known as the Landholders' Society) was established by Dwarkanath Tagore in Bengal.