The correct answer is option C

Ce exist in the oxidation state other than +3 .

The correct answer is Option B.

Sc has the lowest density (3.1 g cm−3). It is the lightest transition element.

*Multiple options can be correct
QUESTION: 13

*Multiple options can be correct
QUESTION: 14 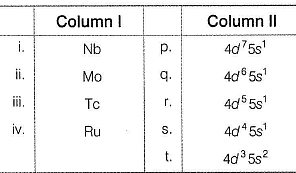 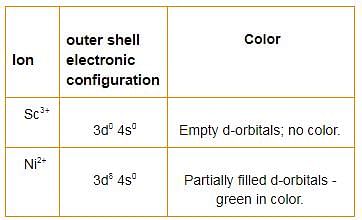 The correct answer is option C
In Electrolytic refining, the impure metal is made to act as an anode. A strip of the same metal in pure form is used as a cathode.
They are put in a suitable electrolytic bath containing a soluble salt of the same metal.
The more basic metal remains in the solution and the less basic ones go to the anode mud.
Copper is refined using an electrolytic method.
Impurities from the blister copper deposit as anode mud which contains antimony, selenium, tellurium, silver, gold, and platinum; recovery of these elements may meet the cost of refining.

80 lakh
Students
I have an EduRev Account   •   Sign Up with Email
Do you know? How Toppers prepare for NEET Exam
With help of the best NEET teachers & toppers, We have prepared a guide for student who are preparing for NEET : 15 Steps to clear NEET Exam
Read for Free Join NEET Courses