Which of the pairs given above is are correct?

► Statement 1 is correct: Harappa was excavated by Daya Ram Sahni and in 1922;

► Statement 2  is incorrect: Mohen-jo-daro was excavated by R.D Banerjee.

► Statement 3  is incorrect: Banawali was excavated by RS Bisht.

► Statement 1 is correct: It is also called Bronze age civilization

► Statement 2 is incorrect: It Flourished around 2,500 BC

► Statement 3 is correct: It also Proto-Historic civilization the script is yet undeciphered.

Which of the following sites is/are part of the Mature Harappan phase?

Mature Harappan Phase from 2600 to 1900 BCE. By 2600 BC, the Indus Valley Civilization had entered into a mature stage. The early Harappan communities were turned into large urban centres, like Harappa and Mohenjodaro in Pakistan and Lothal in India.

Who of the following proposed Sumerian origin theory regarding Indus Valley Civilization?

Sumerian Origin - According to William Mortimer, the IVC people were actually of Sumerian origin.

Pro:  Lot of similarities exist between Sumerian and IVC regarding urban culture and economy. The idea of city building could have spread from Mesopotamia.

1. A lot of the IVC artefacts resemble the traditional artworks excavated from South India.
2. There is some similarity between the IVC script and the Brahmi Script.

Which of the statements given above is/ are correct?

► Statement 1 is correct: A lot of the IVC artefacts resemble the traditional artworks excavated from South India.

► Statement 2 is correct: There is some similarity between the IVC script and. the Brahmi Script.

Which of the above is/are characteristics of Indus Valley Civilization architecture?

The town planning is based on the division of the towns into 2 main parts-citadel/acropolis and lower town. Citadel is a smaller but higher portion built on an upraised platform with walls fortifying it from all sides. This was used for buildings of large dimensions such as granaries, administrative buildings, pillared halls and courtyard. The use of burnt bricks in the Harappan cities is remarkable, because in the contemporary buildings of Egypt mainly dried bricks were used.

Which of the following statement is not correct regarding Indus Valley Civilization?

The IVC cities were planned well in advance. The streets cut each other at ninety degrees or right angles.

1. The Indus bricks were of standard in size
2. The house planning is well evident from the lower town of the Mohenjo-Daro.

Which of the statements given above is/are incorrect?

► Statement 1 is correct: The bricks were of standard size and ratio (4:2:1) and similar standardized bricks were employed in all settlements in this culture. Each of the houses is built around a courtyard with rooms built around it.

► Statement 2 is correct: The domestic house planning and architecture is well evident from the lower town of the Mohenjo-Daro.

► Statement 1 is incorrect: Granaries were found at several sites such as Harappa, Lothal and Mohenjo-daro.

► Statement 2 is correct: Two rows of six granaries were found at Harappa  that appear to be foundations are arranged along a central passageway that is about 7 meters wide and partly paved with baked bricks.

Which of the following statement is not correct regarding  the Great Bath?

Explanation : a) The Great Bath of Mohenjo-Daro is called as earliest public water tank of the ancient world. It was a huge bath made of brunt/baked bricks. It was probably used for public ceremonies and was situated in a public place.

b) The excavations reveal this fact.

A large number of public baths, the excellent water management system, running water in every house, neat drainage systems and the underground wastewater systems all point out to the importance of hygiene in Harappan life.

c) The Mohenjo Daro site has "The Great Bath" which shows well-defined steps in its contours. The region is claimed to have been used as common bathing area. This structure has outlets to drain out the used water and keep the water clean after repeated usage.

• The site Kalibangan has a citadel complex which is roughly a parallelogram (240 by 120 metres) divided into two equal parts with a partition wall and surrounded by a rampart with sections and salients. The wall is made of mud bricks in a ratio of 4:2:1, with mud plaster on both the inner and outer faces. The southern half of the citadel had ceremonial platforms and fire altars. Kalingam had a similar town planning like that of Mohenjo Daro where Fire altars have been discovered.

• Lothal has two primary zones – the upper and the lower town. The citadel or the upper town is located in the south eastern corner and is demarcated by platforms of mud-brick of 4 meters in height instead of a fortification wall. Also Rectangular and circular fire altars were found in the Lothal area. These altars suggest fire worship or worship of Agni, the god of fire.

1. Suktagendor was located around 55Kms from the shore of Arabian Sea on the Bank of Dasht River near the Iran Border. It was an important coastal town along with Lothal and Balakot (in Pakistan)and is considered to be the western border of Indus Valley.
2. Alamgirpur is an archaeological site of the Indus Valley Civilisation that thrived along the Yamuna River (c. 3300-1300 BC) from the Harappan Bara period, located in Meerut district, Uttar Pradesh,India. It is the eastern most site of the civilisation.
3. The southern most archaeological site of the Indus Valley/Harappan Civilization is at Diamabad, Maharashtra.
4. Manda is situated on the right Bank of Chenab River in the foothills of PirPanjal range, 28Km north-west of the Jammu, and was considered the northernmost limit of the Harappan Civilisation. It is considered the northmost site of Indus Valley Civilisation.

• Khetri Nagar, well known for its Copper Project, was built by and is under the control of Hindustan Copper Limited, a public sector undertaking under the Government of India. Khetri Nagar is also very well known with the name of 'Copper'.

• Lapis lazuli is found in limestone in the Kokcha River valley of Badakhshan province in northeastern Afghanistan, where the Sar-e-Sang mine deposits have been worked for more than 6,000 years.

• Jade refers to an ornamental mineral, mostly known for its green varieties. It can refer to either of two different silicate minerals: nephrite, and jadeite. Jade is featured prominently in East Asian, South Asian and Southeast Asian art, but also has an important place in many other cultures.

• Persia's historical Khorasan region was the traditional source of Turquoise for many of the travelling salesmen in Central Asia and Europe at the time.It was from this trade, in fact, that the gemstone received its very name; the trade route into Europe passed through Turkey and the Old French name for anything Turkish was turqueise, which evolved to become the name we know it by today.

The evidence of Indian ships and a piece of woven cloth has been discovered from the seals of which of the following sites?

The evidence of Indian ships (figure on a seal) and a piece of woven cloth has been discovered from Mohenjo Daro and not from Lothal, inspite of being near to the sea and being a trade centre.

Carbon – 14 is an isotope of Carbon which is radioactive. We know that its half life is 5730 years, that is, it takes certain number of carbon 14 atoms to become half in number in 5730 years. Using this information and calculating the present radiation from the seals of IVC, the scientist can get a better estimates with respect to the age of those seals.

A scale has been found at which of the Harappan sites?

Dear aspirant if you do not remember this then you are advised to again read section on Lothal in the module on Urban Growth & significance of IVC sites.

The Harappan houses opened on the main street in which one of the following cities?

Which of the following statements on the Harappan civilization is wrong? 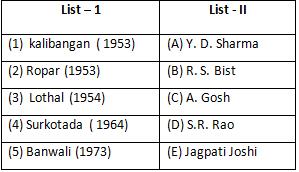 This archaeological site consist of a number of low archaeological mounds created by generations of superimposed mud brick structures. Located close to the mouth of the Bolan Pass, it was abandoned by the time of the emergence of the literate urbanised phase of the Indus Civilisation. An entry in the UNESCO tentative list, it is?

It was a small farming village. It is one of the earliest sites with evidence of farming and herding in South Asia. Mehrgarh is now seen as a precursor to the Indus Valley Civilization, displaying the whole sequence from earliest settlement and the start of agriculture, to the mature Harappan Civilisation.