An ideal spring with spring-constant k is hung from the ceiling and a block of mass M is attached to its lower end. The mass is released with the spring initially unstretched. Then the maximum extension in the spring is

Once the mass is released, the spring would extend Mg/k length where it comes to an equilibrium, but by then the mass would have gained some speed due to which the spring will be stretched Mg/k length more and then start a damped oscillation. Thus maximum extension by spring is 2Mg/k length.

A spherical ball of mass m is kept at the highest point in the space between two fixed, concentric spheres A and B (see figure.) The smaller sphere A has a radius R and the space between the two spheres has a width d. The ball has a diameter very slightly less than d. All surfaces are frictionless. The ball is given a gentle push (towards the right in the figure). The angle made by the radius vector of the ball with the upward vertical is denoted by q (shown in the figure) [JEE-2002]

(a) Express the total normal reaction force exerted by the spheres on the ball as a function of angle q.

(b) Let NA and NB denote the magnitudes of the normal reaction force on the ball exerted by the spheres A and B, respectively. Sketch the variations of NA and NB as functions of cosq in the range 0 £ q £ p by drawing two separate graphs in your answer book, taking cosq on the horizontal axes.

Since gravitational force is conservative in nature, so, only initial and final position matter.

A particle is placed at the origin and a force F = kx is acting on it (where k is a positive constant). If U(0) = 0, the graph of U(x) versus x will be (where U is the potential energy function)

This is the equation of parabola symmetric to U axis in negative direction.

A bob of mass M is suspended by a massless string of length L. The horizontal velocity V at position A is just sufficient to make it reach the point B. The angle q at which the speed of the bob is half of that at A, satisfies 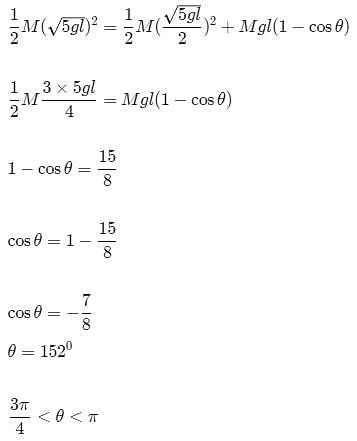 A light inextensible string that goes over a smooth fixed pulley as shown in the figure connects two blocks of masses 0.36 kg and 0.72 kg. Taking g = 10 m/s2, find the work done (in joules) by the string on the block of mass 0.36 kg during the first second after the system is released from rest.

A ball of mass (m) 0.5 kg is attached to the end of a string having length (L) 0.5 m. The ball is rotated on a horizontal circular path about vertical axis. The maximum tension that the string can bear is 324 N. the maximum possible value of angular velocity of ball (in radian/s) is

A block of mass 0.18 kg is attached to a spring of force-constant 2 N/m. The coefficient of friction between the block and the floor is 0.1. Initially the block is at rest and the spring is un-stretched. An impulse is given to the block as shown in the figure. The block slides a distance of 0.06 m and comes to rest for the first time. The initial velocity of the block in m/s is V = N/10. Then N is

Two identical discs of same radius R are rotating about their axes in opposite directions with the same constant angular speed w. The discs are in the same horizontal plane At time t = 0, the points P and Q are facing each other as shown in the figure. The relative speed between the two points P and Q is nr.In one time period (T) of rotation of the discs, nr as a function of time is best represented by

At the top and bottom of the path, the direction of motion of each of them is opposite to that of the other. Thus, relative speed increases.
At the diametrically opposite positions to P and Q, again the motion is in the same direction and the speeds are equal, so, relative speed is 0.
Thus, the relative speed increases from 0 to a maximum value as the discs rotate from P and Q to the bottom of the path , then it decreases to 0 as they rotate from the bottom to the diametrically opposite positions to P and Q , and again increases as they rotate to the top and finally becomes 0 as they come back again to their original position.