In a normal pregnant woman, the amount of total gonadotropin activity was assessed. The result expected was.

Which of the following hormones is not a secretion product of human placenta?

Prolactin is secreted by the anterior lobe of pituitary gland. After parturition, secretion and storage of milk in mammary glands is under the influence of this hormone.

Fill in the blanks in the given statement and select the correct option.
A. The developmental stage of an animal passed in the mother's womb is called  (i) .
B. The outer layer of blastula is called  (ii) . It does not take part in the formation of  (iii) .
C.  (iv)  is the first germ layer formed from the inner cell mass by differentiation.

hCG, hPL and relaxin are produced in women

Fetus gets nourishment and oxygen through

Placenta is an intimate connection between the fetus and uterine wall of the mother to exchange the materials. Food materials and oxygen pass from the mother's blood into the fetal blood and fetal excretory products diffuse into maternal blood through placenta.

Identify the labelled parts A−D in the given figure of human foetus within the uterus. 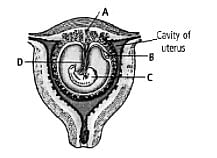 The main function of trophoectoderm in mammalian embryo is

During embryonic development, the blastocyst formed consists of an outer envelope of cells called the trophoblast and the inner cell mass. The cells of trophoblast form chorion and amnion and hence part of placenta.

Gastrula is the embryonic stage in which

Transformation of the blastocyst into gastrula with primary germ layers by rearrangement of the cells is called gastrulation. In all the triploblastic animals three germ layers-ectoderm, mesoderm and endoderm are formed by characteristic morphogenetic movements.

During pregnancy, human chorionic gonadotropin hormone is released by trophoblastic cells which passes out in urine. Thus, if this hormone appears in urine test, it means the woman is pregnant. This hormone maintains the corpus luteum and stimulates it to secrete progesterone which is required for the maintenance of the uterus.

Structure connecting the foetus to placeiita is

Umbilical cord is a narrow. Tube like structure that connects the fetus to the placenta. Through this tube, nutrients and oxygen are supplied from the mother to the baby and waste products are removed from the baby,.

During the development of embryo, which of the following occurs first?

After fertilisation, the zygote undergoes the process of cleavage to form a number of cells which ultimately undergo the process of differentiation and then form tissues, organ and lastly organ systems.

Select the option that correctly fills up the blanks in the given paragraph.

Vertebral column is derived from