Which country is the largest producer of tea in the world?

China is indisputably the largest producer of tea in the world, producing 1,700,000 tonnes in 2013 alone – a figure that was approximately 30-35% of the total amount produced in the world that year.

Its strong skills in production shouldn't be seen as a surprise, given its long history with the drink – legend has it that tea was introduced in China by emperor and herbalist Shennong in 2737 BCE. It has been consumed as everything from a beverage to a medicine, and is at the center of countless cultural rituals in the nation.

Several varieties are produced in China including green, oolong, white, pu-erh, yellow, and jasmine teas to name a few.

Pennine is world famous breed of:-

Horses have been present and used in the Dales area from early times. Horse remains dating to Roman times were found in the Ribchester area of the Dales, during North Pennines Archaeology's excavations at land behind the Black Bull Inn in 2009. The Romans themselves named an ancient British tribe to the east of the Pennines the Gabrantovici, or 'horse-riding warriors'. The history of the modern Dales pony is strongly linked to the history of lead mining in the Dales area of England, which stretches from the Derbyshire peaks to the Scottish borders. Lead has been mined in this area since Roman times,and Richard Scrope, then Chancellor of England, owned lead mines at Wensleydale in the 14th century. Iron ore, fuel for smelting, and finished lead were all carried on pack ponies, with each pony carrying up to 240 lb (110 kg) at a time. Pack pony trains of up to 20 ponies worked 'loose' (not led), under the supervision of one mounted train leader.
The modern Dales pony is descended from a number of breeds, with the original working ponies being bred by crossing the Scottish Galloway pony with native Pennine pony mares in the Dales area in the late 1600s.

Which of the following is busiest ocean trade route?

It connects the South Amrica to North America(Panama Canal) , Africa to Europe and Europe to Asia (through Gibraltar Strait connecting Mediterranean Sea ).It is the trade route between the continents and is always full of cargo ships being carried around continent to Page on continent.it spreads over 32 million square.

Which among the following State is not a natural source of Crude Oil in India ?

Which of the following oceans are connected by Panama Canal?

The Panama Canal (Spanish: Canal de Panamá) is a man-made 48-mile (77 km) waterway in Panama that connects the Atlantic Ocean with the Pacific Ocean. The canal cuts across the Isthmus of Panama and is a key conduit for international maritime trade.

The Goldmines of South Africa are near which of the following ?

The "Golden Arc" which stretches from Johannesburg to Welkom was once a massive inland lake, and that silt and gold deposits from alluvial gold settled in the area to form the gold-rich deposits that South Africa is famous for.

Which one of the following countries is the largest producer of coal in the world?

China has been by far the biggest coal producing country over the last three decades. The country produced about 3.6 billion tonnes (Bt) of coal in 2012 accounting for over 47% of the world's total coal output

Select the longest river of Asia from the following 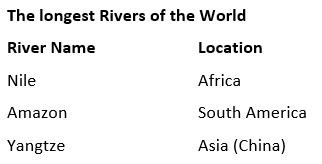 Which of the following is dubbed as a ‘living fossil’ ?

Sphenodon punctatus, also called as Tuatara is currently the living fossil because it received a second opportunity to keep inhabiting the incredible islands of New Zealand.All species of the Sphenodontia members apart from the Tuatara, declined and eventually became extinct about 60 million years ago. Only Tuatara survived to become a "living fossil". The introduction of foreign mammals has been one of the main factors of the recent decline of tuataras, especially the introduction of the Pacific rat. So, massive eradication of the rats was undertaken and no predators invaded New Zealand which made them survive again.

The altitude of troposphere in our atmosphere is about

The “Ninety East Ridge” is a submarine volcanic ridge located in __?

The Ninety East Ridge is an 5500 km long, north-south-oriented, submarine volcanic ridge in the eastern Indian Ocean that formed from magmatism associated with the deep seated Kerguelen mantle plume as the Indian plate drifted rapidly northward during the Late Cretaceous.

The main difference between asteroids and comets is their composition, as in, what they are made of. Asteroids are made up of metals and rocky material, while comets are made up of ice, dust and rocky material. Both asteroids and comets were formed early in the history of the solar system about 4.5 billion years ago. Asteroids formed much closer to the Sun, where it was too warm for ices to remain solid. Comets formed farther from the Sun where ices would not melt. Comets which approach the Sun lose material with each orbit because some of their ice melts and vaporizes to form a tail.

Which of the following steps can, possibly reduce the intensity of natural disasters recently experienced in Uttarakhand ?

Three storey agriculture is practiced in which of the following country:-

Sky Greens’Singapore vertical farming provides both an efficient and environmentally sound solution. Jack Ng founded Sky Greens, the world’s first low-carbon hydraulic water-driven urban vertical farm that reduces the amount of energy and land needed for traditional farming techniques. Within a greenhouse, the three storeys-high vertical systems are able to produce five to ten times more per unit area compared to conventional farms. The greenhouse and low-carbon hydraulic system allows lettuces and cabbages to be grown year-round using less energy and water. While Sky Greens produce is a premium good, it is still priced competitively and found at grocery stores in Singapore. For a small country that imports the majority of their food from China, Indonesia, and even Europe and the United States, projects like Sky Greens could be a valuable way to feed a growing population.

One carbon credit is equivalent to

A carbon credit is a financial instrument that allows the holder, usually an energy company, to emit one ton of carbon dioxide. Credits are awarded to countries or groups that have reduced their greenhouse gases below their emission quota

Which among the following is the highest peak in Africa?

Mount Kilimanjaro is the highest mountain on the African continent. Its summit is 19,340 feet (5,895 meters) above sea level. It is located in Tanzania. with its three volcanic cones, "Kibo", "Mawenzi", and "Shira", is a dormant volcano in Tanzania.

The logo of Indian Ecomark Scheme is

Ecomark or Eco mark is a certification mark issued by the Bureau of Indian Standards (the national standards organization of India) to products conforming to a set of standards aimed at the least impact on the ecosystem. The marking scheme was started in 1991.

Which is the hottest area of the sun ?

Which of the following terms is related to rearing of honey-bees ?

Sericulture: The commercial rearing of silk worms.Pisciculture: Breeding of fish in specially constructed tanks and ponds.Viticulture: Cultivation of Grapes.Horticulture: Growing vegetables, flowers and fruits for commercial use.

The petroleum producing places, Kirkuk, Mosul and Basara are situated in :

According to the Oil & Gas Journal , Iraq is one of the top holders of proved oil reserves in the world. Iraq has five supergiant fields (defined as holding more than 5 billion barrels of oil reserves) in the south. The resource in place held by these supergiant fields accounts for about 50% of Iraq’s total estimated reserves. An estimated 20% of oil resources are located in northern Iraq, including the areas of Kirkuk, Irbil, and Mosul.

Which one of the following can one come across if one travels through the Strait of Malacca:

Srait of Malacca, waterway connecting the Andaman Sea (Indian Ocean) and the South China Sea (Pacific Ocean). It runs between the Indonesian island of Sumatra to the west and peninsular (West) Malaysia and extreme southern Thailand to the east and has an area of about 25,000 square miles (65,000 square km). The strait is 500 miles (800 km) long and is funnel-shaped,

Terrarosia is typically developed in geographical region of-

Terra rossa is a type of red clay soil produced by the weathering of limestone. When limestone weathers, the clay contained in the rocks is left behind, along with any other non-soluble rock material. Under oxidizing conditions, when the soils are above the water table, iron oxide (rust) forms in the clay. This gives it a characteristic red to orange colour.Terra rossa is typically found in regions with a Mediterranean climate

Within which country’s geographical boundary, does the Tropic of Cancer cross the 0°- meridian ?

There are 8 countries, 3 continents and 6 water bodies lies on Prime Meridian passes.

Which of the following rivers is known as the “Sorrow of China”?

The river Hwang Ho was also known as the ‘Sorrow of China’ because it often used to change its course after floods. This caused major damage to crops and canals dug for the purpose of irrigation. It also affected human life on a large scale and caused widespread distress.

Who was the propounder of ‘Continental Drift Theory’?

In the mid-20th century, the theory of continental drift was referred to as the "Taylor-Wegener hypothesis", although this terminology eventually fell out ofcommon use. Alfred Wegener first presented his hypothesis to the German Geological Society on 6 January 1912.