For state, a stress

mohr circle will have center and radius is

Mohr Circle will be a point with centre (30,0) and radius 0 units

Which of the following is the most appropriate theory of failure for mild steel?

According to this theory, permanent set takes place under a state of complex stress, when the value of maximum principal stress is equal to that of yield point stress as found in a simple tensile test.

For design criterion, the maximum principal stress (σ1) must not exceed the working stress ‘σy’ for the material.

For brittle material, which do not fail by yielding but fail by brittle fracture, this theory gives satisfactory result.

The graph is always square even for different values of σ1 and σ2. According to this theory, a ductile material begins to yield when the maximum principal strain reaches the strain at which yielding occurs in simple tension.

This story over estimate the elastic strength of ductile material. According to this theory, failure of specimen subjected to any combination of load when the maximum shearing stress at any point reaches the failure value equal to that developed at the yielding in an axial tensile or compressive test of the same material. σ1 and σ2 are maximum and minimum principal stress respectively.

According to this theory, a body complex stress fails when the total strain energy at elastic limit in simple tension.

This theory does not apply to brittle material for which elastic limit stress in tension and in compression are quite different.

It states that inelastic action at any point in body, under any combination of stress begging, when the strain energy of distortion per unit volume absorbed at the point is equal to the strain energy of distortion absorbed per unit volume at any point in a bar stressed to the elastic limit under the state of uniaxial stress as occurs in a simple tension / compression test. It cannot be applied for material under hydrostatic pressure.

All theories will give same results if loading is uniaxial.

1. On planes having maximum and minimum principal stress, there will be no tangential stress.

3. Maximum shear stress is numerically equal to half the sum of the maximum and minimum principal stress

Which of the following statement is/are correct –

On plane of principal stress, shear stress is always zero but in the plane of maximum shear stress, normal stress may exists.

Shear stresses on mutually perpendicular planes are equal due to moment equilibrium.

Maximum shear stress is numerically half of the difference between maximum and minimum principal stress.

A cube is subjected to equal tensile stress on the three faces. If the yield stress of the material is ‘σy’ and poison ratio ‘μ’ then based on strain energy theory, the maximum tensile stress will be

According to maximum strain energy theory

But σ2 is compressive

The principal stresses developed at a point are +30, -30, 0 MPa. Using shear strain energy theory, a factor of safety obtained is √6. What is yield stress of the material?

In a structural member, there are perpendicular tensile stresses of 100 N/mm2. What is the equivalent stress in simple tension, according to the maximum principal strain theory? (Poisson’s ratio = 0. 50)

According to von Mises theory, for yielding

The Mohr’s circle given below corresponds to which one of the following stress condition. 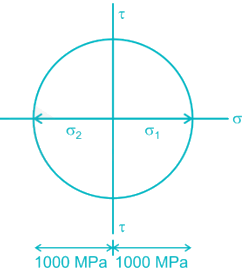 And centre of Mohr’s circle is at a distance,

from the origin. Here it is in origin.

As, σx + σy = 0 both the normal stress may be zero which is a pure shear case or opposite in nature which don’t exist in any of the options. So it is the pure shear case, where the radius is

2D stress matrix at a point is given below:

Maximum and Minimum Normal stress is given by: