Now current as function of time

In the figure shown find the equivalent capacitance between terminals A and B. The letters have their usual meaning capacitance is 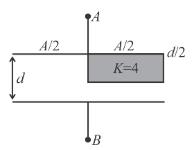 The correct answer is: 13

A capacitor of capacitance 5µF is connected to a source of constant emf of 200 V. Then the switch was shifted to contact 2 from contact 1. Find the amount of heat generated (in mJ) in the  400Ω resistance. 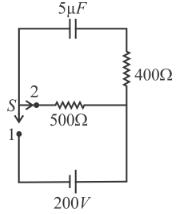 Potential energy stored in the capacitor,

During discharging this 0.1J, will distribute in direct ratio of resistance

A 8µF capacitor C1 is charged to V0 = 120volt. The charging battery is then removed and the capacitor is connected in parallel to an uncharged +4µF capacitor C2.
What is the stored energy (in units of 10–2 J) before and after the switch S is closed?

In the circuit shown, a time varying voltage V = 2000t volt is applied where t is second. At time t = 5ms, determine the current (in A) through the resistor R = 4Ω and through the capacitor C = 300µF. 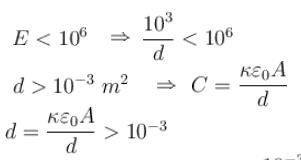 In the figure shown the capacitor is initially uncharged. The current in (R3 = R) at time t is 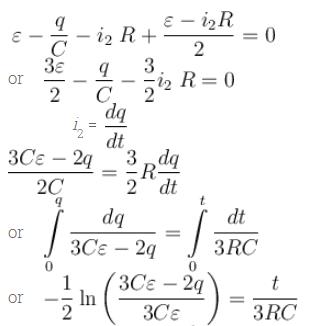 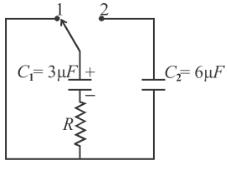 The charge on the capacitor when current reaches I0
q0 = (I0R)·C1
When the switch is in position 2, this charge is shared with capacitor C2 and at steady state potential across C1 is equal to that across C2. The energy lost in this process

The correct answer is: 4

In the circuit shown the capacitors are initially uncharged. In a certain time the capacitor of capacitance 2µF gets a charge 20µC. In that time interval, find the heat produced (in µJ) in each resistor 6Ω.

Given that CA = 1µF, CB = 2µF, and CC = 2µF, Initially each capacitor was charged to potential differences of VA = 10V, VB = 40V and VC = 60V separately and are kept as shown in figure (a). Now they are connected as shown in figure(b). The positive and negative sign shown in figure (b) represent initial polarities. If total amount of heat produced in µJ is given by (3100 – N) by the time steady state is reached find value of N.