Looking at the answer choices, we see that the correct answer is Option C 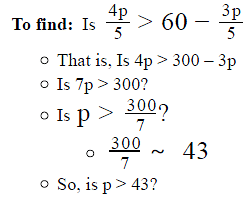 Statement 1 says that ‘The value of p was between 25 and 30, inclusive’

Since Statement 1 leads to a unique answer to the question, it is sufficient

Since we’ve already arrived at a unique answer in Steps 3 and 4, this step is not required
Answer: Option D

An investment of $200,000 in an instrument that returns an annual rate of r percent compounded semi-annually grows to $220,500 in
one year. What is the value of r?

Lucy deposited $62500 in an investment fund that provided 16 percent annual return compounded quarterly. If she made no other transactions with the fund, in how much time, in months, did her investment earn a total interest of $5100?

To Find: Time Period of Investment in Months 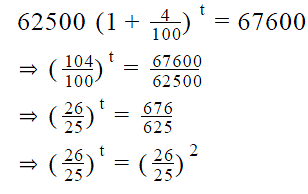 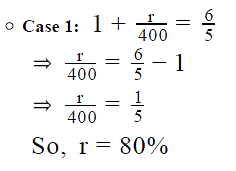 Looking at the answer choices, we see that the correct answer is Option E

Dan borrows a sum of $10,000 from Lucy. Lucy charges Dan an interest of 10% p.a. compound interest, compounded annually. If
Dan pays back a total of $13310 to Lucy, after how many years Dan pays back his entire debt?

Number of years Dan takes to pay his entire debt to Lucy.
Let the number of years be n.
Now we know that the formula for paying the total debt (which is paid at
a compounded interest) is given by 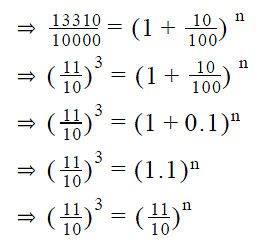 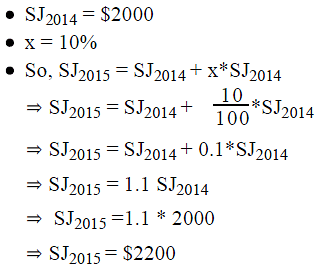 Roger distributed a total investment of $1000 between mutual funds A and B and received a combined yearly return of 10 percent. How much did he invest in mutual fund A?

(1) Had he increased the share of mutual fund A in his total investment by 50 percent, he would have received a combined yearly return of 11 percent

This equation has 2 unknowns. Not sufficient to find a unique value of x.

So, even after both statements together, we cannot find a unique value of a.

So, correct answer is Option D

However, we cannot say for sure if

Putting this in (3), the question simplifies to:

However we do not know for sure if n > m. Insufficient to answer.

To Find: Total amount paid to the money lender?

Hence, Ricky paid a total amount of $6000 to the money lender including the principal and the interest.

What dollar amount invested at the rate of 20 percent per annum compounded annually for 2 years yields an interest of $176?

To Find: Value of x?

Sonya invested $20,000 in a mutual fund scheme, which calculated and reinvested the interest earned in the scheme annually. She received a return of 10 percent in the first year, 20 percent in the second year and 5 percent in the third year. By what amount, in dollars, did her money grow in the three years?

To Find: The Amount by which her money grew in 3 years

So, the correct answer is Option B

Roxie invested $2000 in an account that yielded a fixed rate of annual return compounded annually throughout the duration of
investment. If she earned a total interest of $4000 in 6 years, after how many years of investment did she earn a total interest of
$52000?

To Find: Number of Years after which she earned a total interest of $52,000

Substituting the above found value of

in the above  equation:

Looking at the answer choices, we see that the correct answer is Option A

Petro invested x dollars each in scheme A and scheme B for two years. Scheme A offered a simple interest rate of 10 percent per
annum while scheme B offered an interest rate of 10 percent per annum compounded annually. If the amount received by Petro at
the end of two years in scheme B was $63 greater than the amount received from scheme A, how much in dollars did he invest in
scheme A?

To Find: Value of x?

Novak invested $5000 in scheme A for 4 years, which gave a fixed rate of return each year. From the second year of this investment, the interest earned on scheme A in the previous year was reinvested annually in scheme B, whose annual rate of interest, compounded annually, varied with the performance of scheme B in that particular year. If the total interest earned from both the schemes in the first 3 years was $500, $550 and $710 respectively and scheme B offered an interest rate of 5 percent per annum in the fourth year, what was the total interest in dollars that was earned in the fourth year from both the schemes?

To Find: Total interest earned in the 4 year from both the schemes?