Only One Option Correct Type
This section contains 17 multiple choice questions. Each question has four choices (a), (b), (c) and (d), out of which ONLY ONE is correct

where, y = number of ions of the complex

Four ions are formed from

Thus, (a) is incorrect 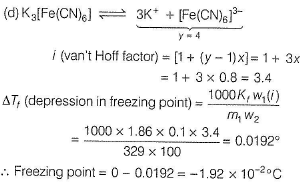 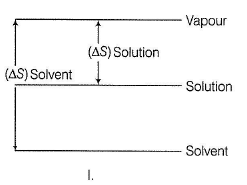 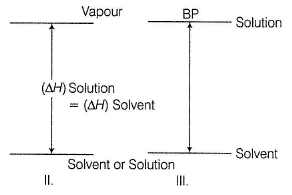 (II) Heats of vaporisation for a pure solvent and for a solution are similar because similar intermolecular forces between solvent molecules must be overcome in both cases, thus correct.

(III) When a non-volatile solute is added to a solvent, vapour pressure falls hence, boiling point is elevated, thus correct

A solution contains 0.1 mole of acetamide in 1 L of glacial acetic acid. When the solution is cooled, the first crystal that appeared at the freezing point contains the molecule(s) of

Two moles of the complex (Cu(NH3)3Ci]Cl are dissolved in 3 moles of H20 . Relative decrease in vapour pressure was found to be 0.50. If this solution is treated with aq. AgN03 solution, then there is formation of 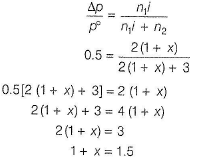 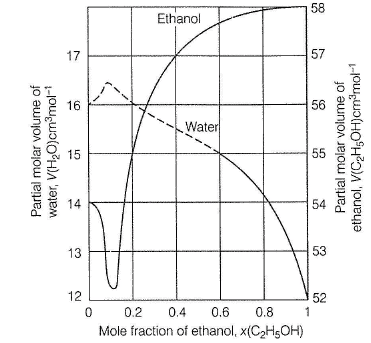 From the graph, partial molar volume of ethanol when

pH of 0.1 M dibasic acid is found to be 3. Hence, its osmotic pressure at temperature T K is

Water coming out of ion-exchange has pH2. Hence, hardness in ppm of Ca2+ ion is 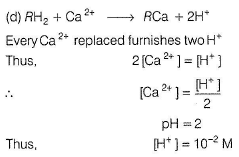 A sample of drinking water is contaminated with CHCI3 to the level of 15 ppm by mass. Thus, mass percentage and molality, respectively are

Based on the given dia gram , which of the fo llow ing statem ents regarding the solu tions of two miscible volatile liquids A and B are correct? 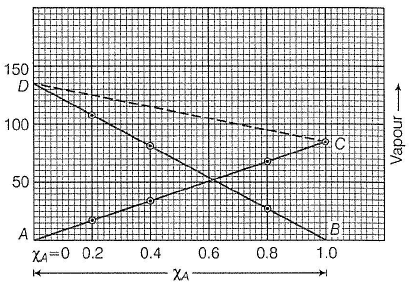 II. Plots CD shows that Dalton’s law of partial pressure is observed for the binary solution of components A and 6.

IV. Vapour pressure of a mixture containing 40 mole % of B is about 105 units.

As A is added into 6, vapour pressure of A decreases and that of 6 increases.

Total vapour pressure at any composition is given by line CD, thus (II) is correct. 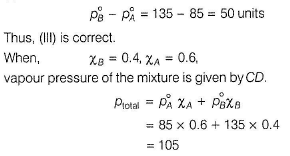 it is same as given by graph.
Thus, (IV) is also correct.

25 mL of an aqueous solu tion of KCI was fo und to require 20 mL of 1.0 M AgN03 solution when titrated using K2Cr04 as an indicator. Thus, d epression in freezing point of KCI solution with 100% ionisation will be

When titration is complete,

This end point is detected. 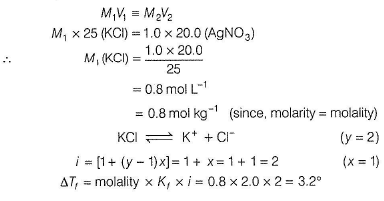 NH3 is always a ligand, hence Cl can be ligand or ionisable ions. One or More than One Options Correct Type
This section contains 4 multiple type questions. Each question has 4 choices (a), (b), (c) and (d), out of which ONE or MORE THAN ONE are correct.

You have been provided with 10.00% by mass solution of ethanol in water.

where, XB is mole fraction of component B in the mixture. From this equation, it is concluded that 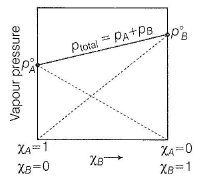 Thus, vapour pressure of 6 increase as Xs increases and decrease as %A decreases.
Line joining

is less than vapour pressure of B

*Multiple options can be correct
QUESTION: 21

If liquids A and B form an ideal solution, then

Two liquids (A, B) form an ideal solution, when force of attraction between A and 6 (in mixture) is same as between A and A and between 6 and 6. In such case,  Δ Hmix= 0.
Since, disorder increases,  Δ Smix. Also, process is spontaneous at a given temperature,

Comprehension Type
This section contains 3 paragraphs, each describing theory, experiments, data, etc. Two questions related to the paragraph have been given.six question related to paragraphs have been given Each question has only one correct answer out of the given 4 options (a), (b), (c) and (d)

What is the vapour pressure at 40°C?

Variation of vapour pressure with temperature is given Clapeyron-Clausius equation.

Lowering of vapour pressure of 0.2 molal urea solution at 40°C is

Variation of vapour pressure with temperature is given Clapeyron-Clausius equation. 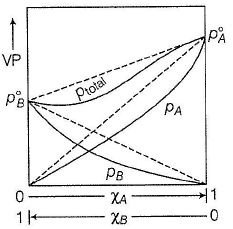 This type of deviation is also expected in the following mixture.

This is a case of negative deviation, thus force of attraction between (A ... B) is larger than average of (A ... A) and (B ... B). Thus, vapour pressure of mixture is decreased, boiling point is increased, hence

Vapour pressure of binary solution containing 6 g of non-volatile solute in 180 g water is 20.0 torr at 298 K. If one mole of water is further added, vapour pressure increases by 0.02 torr.

Molar mass of the solute is 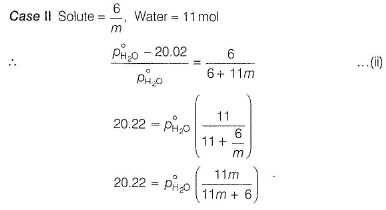 Vapour pressure of binary solution containing 6 g of non-volatile solute in 180 g water is 20.0 torr at 298 K. If one mole of water is further added, vapour pressure increases by 0.02 torr

The so-called ozone layer in the earth's stratosphere has an average total pressure of 10 mm with partial pressure of ozone in the layer 1.2 x 10-5 mm. What is the concentration of ozone (in ppm) assuming that air is a mixture of N2 and 02 is 4 : 1 molar ratio. 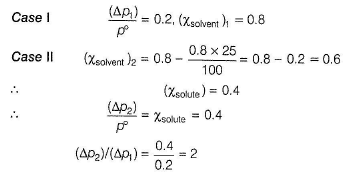 Matching List Type
Choices for the correct combination of elements from Column I and Column II are given as options (a), (b), (c) and (d), out of which one is correct

Match the colligative properties in Column I with their values in Column II and select the answers from the codes given below.

Direction :  This section contains 4 questions. When worked out will result in an integer from 0 to 9 (both inclusive).