Match List-I with List-ll and select the correct answer using the codes given below the lists:
List-I
A. Loess
B. Peat
C. Alluvial soil
D. Marl

Explanation : a) Loess is a deposit of wind-blown silt that blankets large areas of the continents. It is often light brown in color, consisting predominantly of quartz, feldspars, micas, and calcium carbonate.

d) Marl or marlstone is a carbonate-rich mud or mudstone which contains variable amounts of clays and silt. The term was originally loosely applied to a variety of materials, most of which occur as loose, earthy deposits consisting chiefly of an intimate mixture of clay and calcium carbonate, formed under freshwater conditions. These typically contain 35–65% clay and 65–35% carbonate.The term is today often used to describe indurated marine deposits and lacustrine (lake) sediments which more accurately should be named 'marlstone'

Which of the following type of soil is transported by gravitational forces?

According to IS classification, the range of silt size particles is: 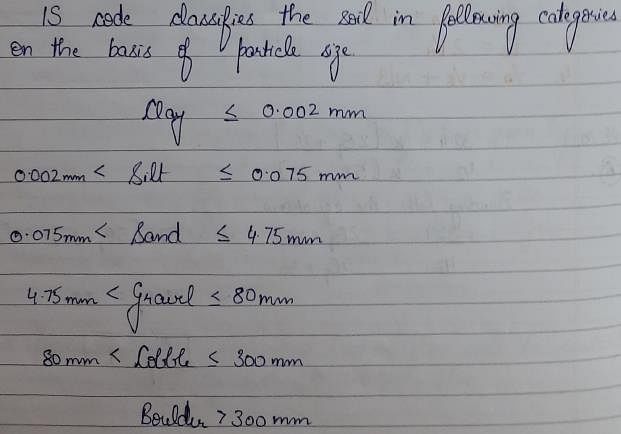 Match
List-I (Type of soil) with List-ll (Feature) and select the correct answer using the codes given below the lists:
List-I
A. Lacustrine
B. Alluvial
C. Aeolian
D. Marine

Match List-I (Range of particle size) with List-II (Type of soil) and select the correct answer using the codes given below the lists:

According to IS grain-size classification

The correct increasing order of specific surface i.e. surface area per mass of the given soils is:

Aeolian soil is a soil which is transported by wind and is mostly sand, thus, has high permeability.

The collapsible soil is associated with

Bentonite is a material obtained due to the weathering of