A diode rectifier cannot perform rectification in both directions' is a perfect example of: 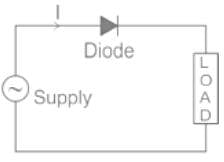 In comparing the operation of the half-controlled 2-pulse circuit with that of the fully-controlled circuit, which of the following statements are evident?

Difference Between Half Wave and Full Wave Rectifier:

The average current rating of a semiconductor diode will be maximum for:

Maximum Average Forward Current (IFAVM):
Diodes are often used in rectifier circuits supplying a DC (average) current to the load.
In such cases, the average load current and the diode forward current usually have a simple relationship.
Therefore, it will be of interest to know the maximum average current, a diode can conduct in the forward direction.
This specification gives the maximum average value of power frequency half cycle sine wave current allowed to flow through the diode in the forward direction.
The average current rating of a diode decreases with a reduction in conduction angle due to an increase in the current “form factor”.

The ripple factor of a power supply is the ratio of:

The amount of AC present in the output of the signal is called as ripple.

The ripple factor indicates the number of ripples present in the DC output.

The output of the power supply is given by

It is given as:

Thus if the ripple factor is less, the power supply has less AC components and power supply output is purer (i.e more DC without much fluctuations)

Thus ripple factor is an indication of the purity of output of the power supply.

Total harmonics distortion is given by,

Now, total power due to all harmonic component

Average output voltage of a three-phase full wave diode rectifier is given by:

Calculate the rectification efficiency of half wave rectifier if input power to rectifier is 150 W and power obtained is 90 W.

Here, Po is the output power

And, Pi is the input power

The transformer Utilization factor of a bridge rectifier is approximately:

It is defined as the ratio of dc power output to the transformer Volt-Ampere (VA) rating required by the secondary winding.

Here, The output average current for R load is given by

Supply voltage Vs RMS is given by Vm/√2

Supply current Is RMS is given by 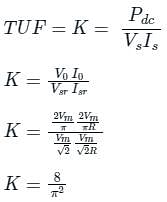 A single-phase full wave bridge diode rectifier delivers a constant current of 10 A to the load. Average and RMS values of source current are

In a single-phase uncontrolled diode rectifier

In a three-phase uncontrolled diode rectifier

In the process of diode based rectification, the alternating input voltage is converted into

Rectification is AC to DC. In DIODE biased rectification, control is not possible.