their farmland to meet the domestic needs of the family.

Which of the statement(s) given above is/are correct?

Farm forestry encouraged individual farmers to plant trees on their farmland to meet the domestic needs of the family. All these schemes are taken up under the social forestry programme.

Which of the following are responsible for the decrease of per capita holding of cultivated land in India?

2. Rapid rate of increase of population

3. Practice of dividing land equally among the heirs.

4. Use of traditional techniques of ploughing.

Solution: The factors responsible for the decrease of per capita holding of cultivated land in India are

1. Rapid rate of increase in population.

2. Practice of dividing land equally among the heirs.

Which one of the major sources of irrigation in India?

There are three basic types of irrigation here in India which I describe here below briefly:-

Canals are one of the oldest amd most important sources of irrigation in India. Canal irrigation is, however, largely confined to the Great Plains of India (Punjab, Haryana, Uttar Pradesh, Uttarakhand, Rajasthan, Bihar and West Bengal) and the fertile plains if India (Andhra Pradesh, Karnataka, Madhya Pradesh Odisha and Tamil Nadu). Some popular canals are The Bari Doab Canal, Bhakhra Canal, Indhira Gandhi Canal, Eastern and Western Yamuna Canals, The Ganga Canal, Agra and Sharda Canals are some of the important irrigation system of India.

Well and tubewells irrigates the largest cropped area of the country. About 54 percent of the total irrigated are is under tubewell and well irrigation. Tubewell irrigation is extensively developed in Northern Plains of India. About 95 percent of the tubewells are located in Uttar Pradesh, Punjab, Haryana, Gujrat, Bihar, Madhya Pradesh, Maharashtra, Andhra Pradesh, Karnataka, West Bengal and Odisha.

Tank irrigation is generally practiced in the eastern part of the Deccan Plateau where the topography is suitable for erecting dams across small rivulets and for the collection of water in artificial tanks. Tanks are found in large number in the districts of Chengalpattu, North Arcot and South Arcot in Tamil Nadu, Nellore and Warangal districts of Andhra Pradesh.

Which is not a food crop from the following?

Tea is the major cash crop

Which of the following are not examples of shifting cultivation? Select the correct answer from the codes given below:

Solution: A Fazenda is a plantation found throughout Brazil; during the colonial period, they were concentrated primarily in the northeastern region, where sugar was produced, expanding during the 19th century in the southeastern region to coffee production. Pondu is a traditional Congolese recipe for a classic stew of cassava leaves (saka-saka).
QUESTION: 6

Assertion (A): Assam is the largest producer of tea in India.

This part of India experiences high precipitation; during the monsoon period, as much as 10 to 12 inches (250–300 mm) of rain per day.

The daytime temperature rises to about 96.8F (36 °C), creating greenhouse-like conditions of extreme humidity and heat. This tropical climate contributes to Assam’s unique malty taste, a feature for which this tea is well known.

A state in India has the following characteristics:

1. The northern part is arid and semiarid.

3. Cultivation of cash crops is predominant over food crops.

Which one of the following states has all of the above characteristics?

Solution: The total geographical area of Gujarat is 19,602,400 hectares, of which crops take up 10,630,700 hectares. The three main sources of growth in Gujarat’s agriculture are from cotton production, the rapid growth of high- value foods such as livestock, fruits and vegetables, and wheat.
QUESTION: 8

Which one of the following statements is not correct regarding tank irrigation in peninsular India?

1. In India, natural rubber is produced in southern India only.

2. Among the coffee-growing states of India, the lowest average yield per hectare of plucked coffee is in Kerala.

Kottayam, Kollam, Ernakulam, Kozhikode districts produce practically all the rubber of this state.

Tamil Nadu is the second-largest producer of rubber but lags far behind Kerala producing only 22 thousand or 3.39 per cent of the total Indian production in 2002-03. Nilgiri, Madurai, Kanyakumari, Coimbatore and Salem are the chief rubber-producing districts of Tamil Nadu.

Among the following states, which one has the most suitable climatic conditions for the cultivation of a large variety of orchids with a minimum cost of production and can develop an export-oriented industry in this field?

Solution: Arunachal’s rich and colourful orchids find a place of pride. Out of about a thousand species of orchids in India, over 600 are to be found in Arunachal alone. Hence this state can rightly be called the “Orchid Paradise” of our country.
QUESTION: 11

Consider the following statements and choose the correct codes given below:

1. Jhum cultivation is adopted in the North-Eastern State of India.

2. Jhum cultivation is a process of afforestation.

The practice involves clearing vegetative/forest cover on land/slopes of hills, drying and burning it before the onset of monsoon and cropping on it thereafter.

After harvest, this land is left fallow and vegetative regeneration is allowed on it till the plot becomes reusable for the same purpose in a cycle. Meanwhile, the process is repeated in a new plot designated for Jhum cultivation during next year.

What is mixed farming?

Solution: Mixed farming is an agrarian system that mixes arable farming with the raising of livestock. When on a farm along with crop production, some other agriculture-based practice like poultry, dairy farming or beekeeping etc. is adopted then this is known as mixed farming.
QUESTION: 13

The shaded area in the map given below is the major producer of which one of the following? 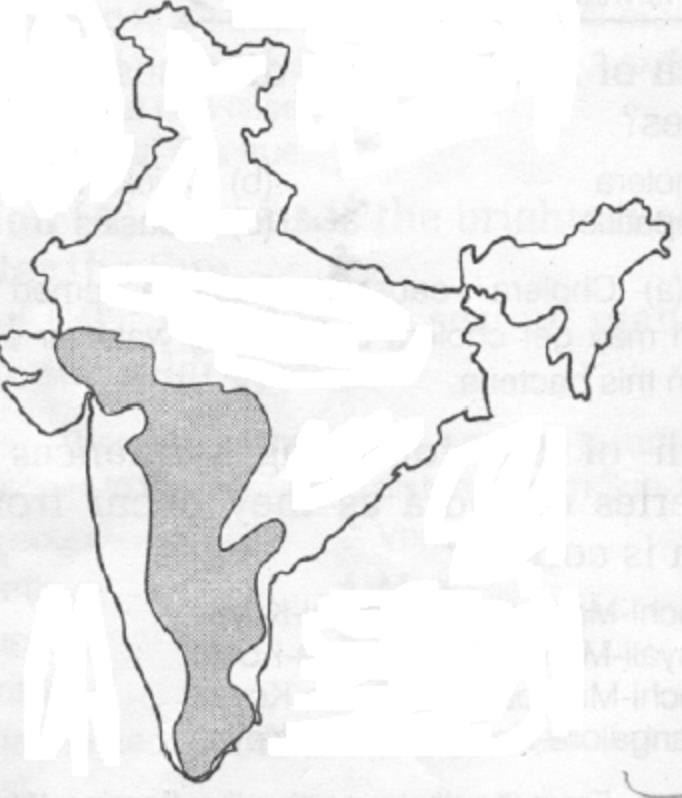 The agricultural production in different parts of India is very much affected by varying intensities of floods and droughts. Which one of the following measures would not be sustainable in this respect?

(a) Provision for extensive irrigation facilities

(b) Change in the crop calendar

(c) Avoidance of flood and drought-prone areas for agriculture


Solution: Avoidance of flood and drought-prone areas for agriculture would not be sustainable in this respect.
QUESTION: 15

Which among the following monoculture crops provide(s) immediate cash to the farmers?

Solution: Cash crops are those which are produced to generate cash or money. The products are therefore intended to be marketed for a profit. Sugarcane and coffee are cash crops which provide immediate cash to farmers.
QUESTION: 16

Farmers are requested to mix lime with soil while farming their fields. This is because

Farmers are advised to mix lime with soil while farming their fields because it increases the pH of acidic soil (the higher the pH the less acidic the soil); in other words, soil acidity is reduced and alkalinity increased.

Leaves of which of the following plants are not used for the rearing of silkworms?

Castor plants are not used for rearing silkworms. Castor oil has many uses in medicine and other applications.

Which of the following statements are correct?

3. Hot and humid conditions are ideal for growing jute.

4. Jute is commonly cultivated with wheat in rotation.

Select the correct answer using the code given below:

Solution: Calcium Ammonium Nitrate (CAN) fertilizer is almost neutral and can be safely applied even to acid soils. Its total nitrogen (N) content is higher and may vary from 25 to 28% N content. Half (12.5% N) of this total nitrogen is in the ammoniacal form and rest half (12.5% N) in nitrate form. This is a good fertilizer applied in Agriculture.
QUESTION: 20

Which one of the following agriculture practices is eco -friendly?