What is dispersion of light?? explain.?

Jasmira Panchal replied Mar 23, 2019
'Dispersion of Light' can be defined as the splitting of whitelight when it passes through a glass prism into its constituent spectrum of colors (i.e. violet, indigo, blue, green, yellow, orange and red). Dispersion figuratively means 'distribution' and hence that's exactly what is happening in the picture above.
Splitting of white light to different colours is known as Dispersion of light..
The phenomenon of splitting up of white light into its constituent colours on passing through a prism is called dispersion of light.

A prism is made up of a transparent medium bounded by two plane surfaces inclined at an angle.

the band of colours obtained is called spectrum of light. The spectrum of light(VIBGYOR) can be seen on a screen placed on the other side of the prism.
Scattering of light in its seven colours is called dispersion
When the white light traveled through the prism it broke down into its seven constituents or known as VIBGYOR(Violet , Indigo ,Blue ,Green, Yellow, Orange ,Red).

This breaking of light into its seven constituents is known as Dispersion... 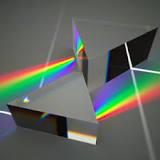