Less
Class 9 Question  >  Needed a Document for important questions on ... 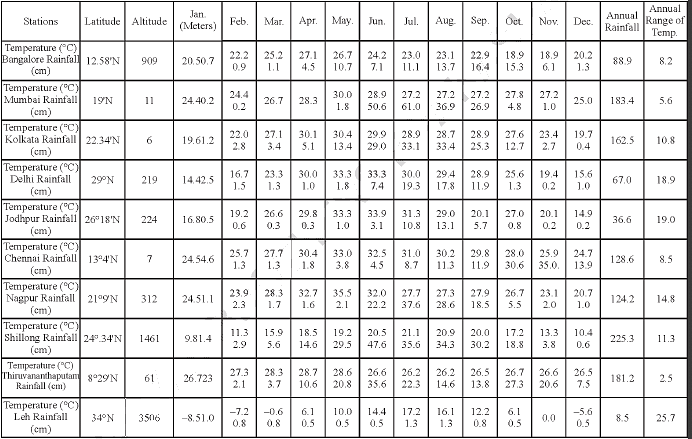 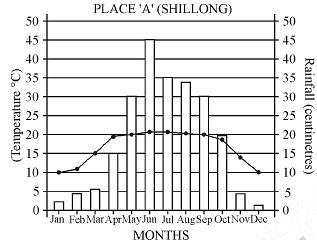 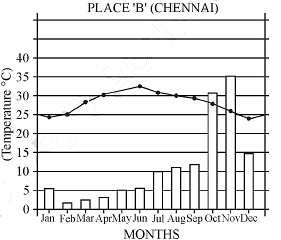 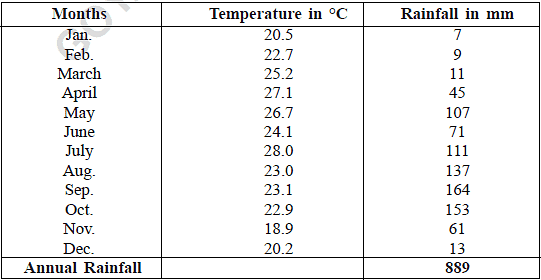 (a) Find out the annual range of temperature of the given place. (b) Name the rainiest month. (c) Which month receives the least rainfall and how much ?
Ans. (a) Annual range of temperature = 28.0 – 18.9 = 9.1�C(b) September is the rainiest month.(c) January receives the least rainfall (7 mm).
Q.16. What is the difference between weather and climate ? What kind of a climate does India have and why? (CBSE 2010)
Ans. Weather refers to the state of the atmosphere over an area at any point of time whereas climate refers to the sum total of weather conditions and variations over a large area for a long period of time. India has 'monsoon' type of climate. The climate of India is strongly influenced by monsoon winds.
Q. 17. 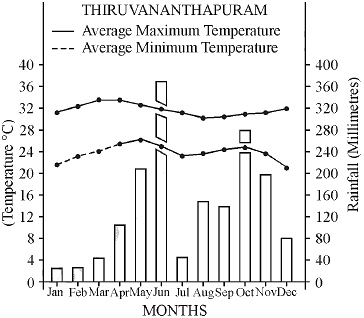 Study the climatic condition of Thiruvananthapuram and answer the following questions : (CBSE 2010) (a) Which two months receive the lowest rainfall? (b) What is the range of temperature in the month of June? (c) Which month receives the highest rainfall? Ans. (a) January and February receive the lowest rainfall.(b) Range of temperature in June = 31 – 24 = 7�C(c) The month of June receives the highest rainfall.
Q.18. What is ITCZ? What is its significance? (CBSE 2010) Ans. It is Inter-Tropical Convergence Zone. This is the equatorial trough normally positioned about 5�N of the equator, also known as the monsoon trough during the monsoon season.Q.19. Study the data given below carefully and answer the following questions. [2011 (T-2)]

(20.1) Name the rainiest month of the year. How much is the rainfall in this month? (20.2) What is the annual range of temperature here? (20.3) Name the hottest month and write the temperature.
Ans. (20.1) August is the rainiest month of the year. In August rainfall is 33.4 cm.(20.2) Temperature 30.4� – 19.6 = 10.8�C(20.3) May is the hottest month of the year (30.4�C)
Q.21. Why do western Ghats receive more rainfall than the Eastern Ghats. Explain briefly. [2011 (T-2)]
Ans. In terms of relief the western Ghats are much higher (900 – 1600 meter) in comparison to the Eastern Ghats (600 meter). The Western Ghats are continuous stretches of high mountains.Therefore, when the moisture ladden Arabian Sea branch of Southwest Monsoon first strikes the Western Ghats it brings heavy rainfall along the windward side of the Western Ghats. In Eastern Ghats, rainbearing winds of Southwest Monsoon do not face such orographic barrier and hence receive much lower amount of rainfall.
Q.22. What are western disturbances? How do they effect the climate of India? [2011 (T-2)]
Ans. The western cyclonic disturbances are weather phenomena of the winter months brought in by the westerly flow from the Mediterranean region. This phenomena usually influence the weather conditions of North and Northwestern regions of India. Tropical cyclones occur during October-November as a consequence of this western disturbances.A characteristic feature of the cold weather season over the northern plains is the inflow of cyclonic disturbances from the west and the Northwest. These low pressure systems originate over the Mediterranean Sea and Western Asia and move into India along with the westerly flow. Under its influence cause the much needed rainfall over the plains and snowfalls in the mountains. The total amount of winter rainfall, locally known as Mahawat, is small but they are of immense value for the cultivation of rabi crops.Q.23. Explain how monsoon acts as a unifying bond in the country. [2011 (T-2)] OR Why are the monsoons considered as a unifying bond? Explain. OR How do monsoon acts as a unifying bond for India? Explain.
Ans. The unifying influence of the monsoon on the Indian subcontinent is felt through its seasonal alternation of the wind systems and the associated weather conditions. It is also perceptible through uncertainties and uneven distribution of monsoon rainfall. The Indian landscape, its flora and fauna, agricultural seasons, livelihood of the people including festivals etc. are governed by the monsoon. Year after year people anxiously wait for the arrival of monsoon. The river valleys which carry monsoon water also unite the country as a single river valley unit.
Q.24. Define monsoon. Differentiate between 'Burst of the Monsoon' and 'Break of the Monsoon. [2011 (T-2)]
Ans. The word 'monsoon' is derived from the Arabic word 'mausim' which means season. It is basically a seasonal rain bearing winds, lasting for 100 – 120 days from early June to mid- September.At the time of its arrival, the normal rainfall increases suddenly and continues constantly for several days. This is known as 'burst of the monsoon'. The phenomenon can be distinguished from the pre-monsoon showers.Another phenomenon associated with the monsoon is its tendency to have breaks in rainfall. The monsoon rains take place only for a few days at a time. They are interspersed with rainless intervals. These breaks in monsoon are related to the movement of the monsoon trough.
Download as PDF
Share with a friend
Answer this doubt