Monetary policy is the process by which the monetary authority of a country controls the supply of money, often targeting an inflation rate or interest rate to ensure price stability and general trust in the currency.

Objectives of Monetary Policies are:-

Repo Rate- Repo rate is the rate at which the central bank of a country (RBI in case of India) lends money to commercial banks in the event of any shortfall of funds. In the event of inflation, central banks increase repo rate as this acts as a disincentive for banks to borrow from the central bank. This ultimately reduces the money supply in the economy and thus helps in arresting inflation.

Reverse Repo Rate is the rate at which RBI borrows money from the commercial banks.An increase in the reverse repo rate will decrease the money supply and vice-versa, other things remaining constant. An increase in reverse repo rate means that commercial banks will get more incentives to park their funds with the RBI, thereby decreasing the supply of money in the market.

Cash Reserve Ratio (CRR) is a specified minimum fraction of the total deposits of customers, which commercial banks have to hold as reserves either in cash or as deposits with the central bank. CRR is set according to the guidelines of the central bank of a country.The amount specified as the CRR is held in cash and cash equivalents, is stored in bank vaults or parked with the Reserve Bank of India. The aim here is to ensure that banks do not run out of cash to meet the payment demands of their depositors. CRR is a crucial monetary policy tool and is used for controlling money supply in an economy.

CRR specifications give greater control to the central bank over money supply. Commercial banks have to hold only some specified part of the total deposits as reserves. This is called fractional reserve banking.

Statutory liquidity ratio (SLR) is the Indian government term for reserve requirement that the commercial banks in India require to maintain in the form of gold, government approved securities before providing credit to the customers. It’s the ratio of liquid assets to net demand and time liabilities.Apart from Cash Reserve Ratio (CRR), banks have to maintain a stipulated proportion of their net demand and time liabilities in the form of liquid assets like cash, gold and unencumbered securities. Treasury bills, dated securities issued under market borrowing programme and market stabilisation schemes (MSS), etc also form part of the SLR. Banks have to report to the RBI every alternate Friday their SLR maintenance, and pay penalties for failing to maintain SLR as mandated.

Inflation occurs due to an imbalance between demand and supply of money, changes in production and distribution cost or increase in taxes on products. When economy experiences inflation, i.e. when the price level of goods and services rises, the value of currency reduces. This means now each unit of currency buys fewer goods and services.

It has its worst impact on consumers. High prices of day-to-day goods make it difficult for consumers to afford even the basic commodities in life. This leaves them with no choice but to ask for higher incomes. Hence the government tries to keep inflation under control.

Contrary to its negative effects, a moderate level of inflation characterizes a good economy. An inflation rate of 2 or 3% is beneficial for an economy as it encourages people to buy more and borrow more, because during times of lower inflation, the level of interest rate also remains low. Hence the government as well as the central bank always strive to achieve a limited level of inflation.

Various measures of Inflation are:-

There are following types on Inflation based on their causes:-

Money supply is the entire stock of currency and other liquid instruments in a country’s economy as of a particular time. The money supply can include cash, coins and balances held in checking and savings accounts.

(i) Currency with the public which includes notes and coins of all denominations in circulation excluding cash on hand with banks: 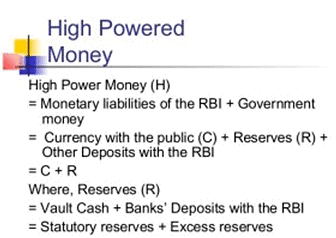 A Commercial bank is a type of financial institution that provides services such as accepting deposits, making business loans, and offering basic investment products

There is acute shortage of capital. People lack initiative and enterprise. Means of transport are undeveloped. Industry is depressed. The commercial banks help in overcoming these obstacles and promoting economic development. The role of a commercial bank in a developing country is discussed as under.

The commercial banks help in mobilising savings through network of branch banking. People in developing countries have low incomes but the banks induce them to save by introducing variety of deposit schemes to suit the needs of individual depositors. They also mobilise idle savings of the few rich. By mobilising savings, the banks channelize them into productive investments. Thus they help in the capital formation of a developing country.

The commercial banks finance the industrial sector in a number of ways. They provide short-term, medium-term and long-term loans to industry.

The commercial banks help in financing both internal and external trade. The banks provide loans to retailers and wholesalers to stock goods in which they deal. They also help in the movement of goods from one place to another by providing all types of facilities such as discounting and accepting bills of exchange, providing overdraft facilities, issuing drafts, etc. Moreover, they finance both exports and imports of developing countries by providing foreign exchange facilities to importers and exporters of goods.

The commercial banks help the large agricultural sector in developing countries in a number of ways. They provide loans to traders in agricultural commodities. They open a network of branches in rural areas to provide agricultural credit. They provide finance directly to agriculturists for the marketing of their produce, for the modernisation and mechanisation of their farms, for providing irrigation facilities, for developing land, etc.

People in underdeveloped countries being poor and having low incomes do not possess sufficient financial resources to buy durable consumer goods. The commercial banks advance loans to consumers for the purchase of such items as houses, scooters, fans, refrigerators, etc. In this way, they also help in raising the standard of living of the people in developing countries by providing loans for consumptive activities and also increase the demand in the economy.

The commercial banks finance employment generating activities in developing countries. They provide loans for the education of young person’s studying in engineering, medical and other vocational institutes of higher learning. They advance loans to young entrepreneurs, medical and engineering graduates, and other technically trained persons in establishing their own business. Such loan facilities are being provided by a number of commercial banks in India. Thus the banks not only help inhuman capital formation but also in increasing entrepreneurial activities in developing countries.

banks for the success of its policy of monetary management in keeping with requirements of a developing economy.

However, in terms of Agriculture / Farm Loans; the NPA is defined as under:

Reselling of NPAs :- If a bad loan remains NPA for at least two years, the bank can also resale the same to the Asset Reconstruction Companies such as Asset Reconstruction Company (India) (ARCIL).  These sales are only on Cash Basis and the purchasing bank/ company would have to keep the accounts for at least 15 months before it sells to other bank. They purchase such loans on low amounts and try to recover as much as possible from the defaulters. Their revenue is difference between the purchased amount and recovered amount.

Financial inclusion or inclusive financing is the delivery of financial services at affordable costs to sections of disadvantaged and low-income segments of society, in contrast to financial exclusion 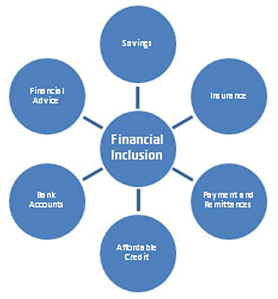 Government of India has launched an innovative scheme of Jan DhanYojna for Financial Inclusion to provide the financial services to millions out of the regulated banking sector.

Various program’s for financial inclusion are:-

Pradhan Mantri Jan-DhanYojana (PMJDY) was formally launched on 28th August, 2014. The Yojana envisages universal access to banking facilities with at least one basic banking account for every household, financial literacy, access to credit, insurance and pension. The beneficiaries would get a RuPay Debit Card having inbuilt accident insurance cover of Rs.1.00 lakh. In addition there is a life insurance cover of Rs.30000/- to those people who opened their bank accounts for the first time between 15.08.2014 to 26.01.2015 and meet other eligibility conditions of the Yojana.