At the time of independence, the western portion of Jodhpur and Bikaner Railway was ceded to the government of Pakistan. The rest portion was taken over by Rajasthan state in 1949. The Western Railway was created on 5th November 1951 by the merger of several state-owned railways, including the B.B. &C.I. Railway and the Saurashtra Railway, Rajput Ana Railway and Jaipur State Railway. The Narrow gauge lines of Cutch State Railway was also merged into it. The divisions of railway in Rajasthan were Jaipur division, Ajmer division and kota division. 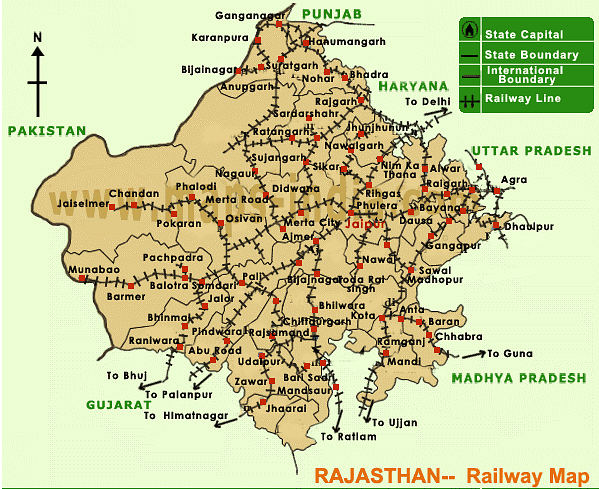 The Northern Railway came in to existence in 1952. It was one of the Indian Railways largest zones. Bikaner division and Jodhpur division were attached with it.

Today, there is 5780.06 kms of railway track available in Rajasthan, out of which 4465.12 kms of broad gauge, 1228.24 kms of metre gauge and 86.70 kms of narrow gauge. Rail is playing an important role in gross state domestic product and providing employment to lacs of people in Rajasthan. Life cannot be imagined without rail.

As far as air transport is concerned, Jaipur airport is Rajasthan's only international airport. There are other airports atJodhpur Udaipur while the one at Jaisalmer is only open from October to March. Indian Airlines and Jet Airways operate regular flights to Rajasthan from New Delhi and Mumbai. Most foreign tourists land either at New Delhi or Mumbai and then take a convenient connecting flight to any of the above-mentioned destinations of Rajasthan.

Name of Airports of Rajasthan are:-