Most of the knowledge we have about Earth’s deep interior comes from the fact that seismic waves penetrate the Earth and are recorded on the other side.  Earthquake ray paths and arrival times are more complex than illustrated in the animations, because velocity in the Earth does not simply increase with depth. Velocities generally increase downward, according to Snell’s Law, bending rays away from the vertical between layers on their downward journey; velocity generally decreases upward in layers, so that rays bend toward the vertical as they travel out of the Earth. Snell’s Law also dictates that rays bend abruptly inward at the mantle/outercore boundary (sharp velocity decrease in the liquid) and outward at the outer core/inner core boundary (sharp velocity increase). 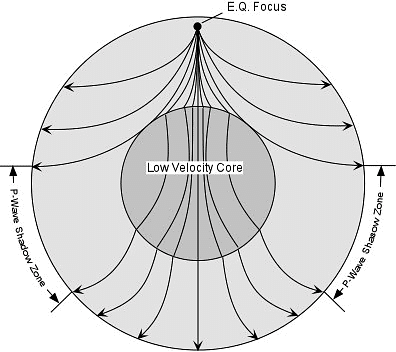 Major Points to remember about P S and Love waves

The Crust of Earth

It is the outermost and the thinnest layer of the earth’s surface, about 8 to 40 km thick. The crust varies greatly in thickness and composition – as small as 5 km thick in some places beneath the oceans, while under some mountain ranges it extends up to 70 km in depth.

The crust is made up of two layers­ an upper lighter layer called the Sial (Silicate + Aluminium) and a lower density layer called Sima (Silicate + Magnesium).The average density of this layer is 3 gm/cc.

The Mantle of Earth

Mantle is made up of 2 parts: Upper Mantle or Asthenosphere (up to about 500 km) and Lower Mantle. Asthenosphere is in a semi­molten plastic state, and it is thought that this enables the lithosphere to move about it. Within the asthenosphere, the velocity of seismic waves is considerably reduced (Called ‘Low Velocity

The line of separation between the mantle and the crust is known as Mohoviricic Discontinuity.

The Core of Earth

Beyond a depth of 2900 km lies the core of the earth. The outer core is 2100 km thick and is in molten form due to excessive heat out there. Inner core is 1370 km thick and is in plastic form due to the combined factors of excessive heat and pressure. It is made up of iron and nickel (Nife) and is responsible for earth’s magnetism. This layer has the maximum specific gravity. The temperatures in the earth’s core lie between 2200°c and 2750°c. The line of separation between the mantle and the core is called Gutenberg­Wiechert Discontinuity.

The interaction of matter and temperature generates these forces or movements inside the earth’s crust. The earth movements are mainly of two types: diastrophism and the sudden movements.

The energy emanating from within the earth is the main force behind endogenic geomorphic processes.

This energy is mostly generated by radioactivity, rotational and tidal friction and primordial heat from the origin of the earth. This energy due to geothermal gradients and heat flow from within induces diastrophism and volcanism in the lithosphere.

Diastrophism is the general term applied to slow bending, folding, warping and fracturing.

Wrap = make or become bent or twisted out of shape, typically from the action of heat or damp; make abnormal; distort.

All processes that move, elevate or build up portions of the earth’s crust come under diastrophism. They include:

epeirogenic processes involving uplift or warping of large parts of the earth’s crust;

Through the processes of orogeny, epeirogeny, earthquakes and plate tectonics, there can be faulting and fracturing of the crust. All these processes cause pressure, volume and temperature (PVT) changes which in turn induce metamorphism of rocks.

The broad central parts of continents are called cartons, and are subject to epeirogeny.

The movement is caused by a set of forces acting along an Earth radius, such as those contributing to Isostacy and Faulting in the lithosphere

Epeirogenic or continent forming movements act along the radius of the earth; therefore, they are also called radial movements. Their direction may be towards (subsidence) or away (uplift) from the center. The results of such movements may be clearly defined in the relief.

Raised beaches, some of them elevated as much as 15 m to 30 m above the present sea level, occur at several places along the Kathiawar, Nellore, and Thirunelveli coasts.

Several places which were on the sea some centuries ago are now a few miles inland. For example, Coringa near the mouth of the Godavari, Kaveripattinam in the Kaveri delta and Korkai on the coast of Thirunelveli, were all flourishing sea ports about 1,000 to 2,000 years ago.

Submerged forests and valleys as well as buildings are evidences of subsidence. In 1819, a part of the Rann of Kachchh was submerged as a result of an earthquake. Presence of peat and lignite beds below the sea level in Thirunelveli and the Sunderbans is an example of subsidence.

The Andamans and Nicobars have been isolated from the Arakan coast by submergence of the intervening land.

On the east side of Bombay island, trees have been found embedded in mud about 4 m below low water mark. A similar submerged forest has also been noticed on the Thirunelveli coast in Tamil Nadu.

A large part of the Gulf of Mannar and Palk Strait is very shallow and has been submerged in geologically recent times. A part of the former town of Mahabalipuram near Chennai (Madras) is submerged in the sea.

Orgenic or the mountain-forming movements

Orogenic or the mountain-forming movements act tangentially to the earth surface, as in plate tectonics.

These movements cause considerable deformation over a short span of time, and may be of two types.

It occurs when the surplus accumulated stress in rocks in the earth’s interior is relieved through the weak zones over the earth’s surface in form of kinetic energy of wave motion causing vibrations (at times devastating) on the earth’s surface. Such movements may result in uplift in coastal areas.

An earthquake in Chile (1822) caused a one-metre uplift in coastal areas.

An earthquake in New Zealand (1885) caused an uplift of upto 3 metres in some areas while some areas in Japan (1891) subsided by 6 metres after an earthquake.

Earthquakes may cause change in contours, change in river courses, ‘tsunamis’ (seismic waves created in sea by an earthquake, as they are called in Japan) which may cause shoreline changes, spectacular glacial surges (as in Alaska), landslides, soil creeps, mass wasting etc.

Volcanism includes the movement of molten rock (magma) onto or toward the earth’s surface and also formation of many intrusive and extrusive volcanic forms.

A volcano is formed when the molten magma in the earth’s interior escapes through the crust by vents and fissures in the crust, accompanied by steam, gases (hydrogen sulphide, sulphur dioxide, hydrogen chloride, carbon dioxide) and pyroclastic material. Depending on chemical composition and viscosity of the lava, a volcano may take various forms.

Pyroclastic adjective of or denoting rock fragments or ash erupted by a volcano, especially as a hot, dense, destructive flow. 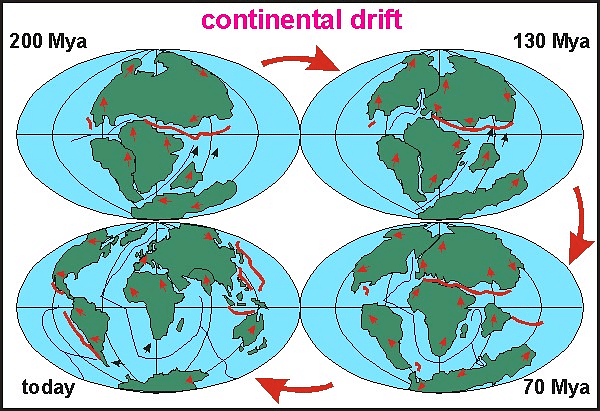 Seafloor spreading is a process that occurs at mid-ocean ridges, where new oceanic crust is formed through volcanic activity and then gradually moves away from the ridge.

Theory of seafloor spreading was proposed by Harry Hess.

Plates are composed of lithosphere, about 100 km thick, which "float" on the ductile asthenosphere.

While the continents do indeed appear to drift, they do so only because they are part of larger plates that float and move horizontally on the upper mantle asthenosphere. The plates behave as rigid bodies with some ability to flex, but deformation occurs mainly along the boundaries between plates.

The plate boundaries can be identified because they are zones along which earthquakes occur. Plate interiors have much fewer earthquakes.

There are three types of plate boundaries:

1. Divergent Plate boundaries, where plates move away from each other.

2. Convergent Plate Boundaries, where plates move toward each other.

3. Transform Plate Boundaries, where plates slide past one another.

Because oceanic lithosphere may get sub ducted, the age of the ocean basins is relatively young. The oldest oceanic crust occurs farthest away from a ridge. In the Atlantic Ocean, the oldest oceanic crust occurs next to the North American and African continents and is about 160 million years old (Jurassic). In the Pacific Ocean, the oldest crust is also Jurassic in age, and occurs off the coast of Japan. Because the oceanic ridges are areas of young crust, there is very little sediment accumulation on the ridges. Sediment thickness increases in both directions away of the ridge, and is thickest where the oceanic crust is the oldest. Knowing the age of the crust and the distance from the ridge, the relative velocity of the plates can be determined. Relative plate velocities vary both for individual plates and for different plates. Sea floor topography is controlled by the age of the oceanic lithosphere and the rate of spreading.

When a plate of dense oceanic lithosphere moving in one direction collides with a plate moving in the opposite direction, one of the plates sub ducts beneath the other. Where this occurs an oceanic trench forms on the sea floor and the sinking plate becomes a sub duction zone. The Wadati-Benioff Zone, a zone of earthquakes located along the subduction zone, identifies a subduction zone. The earthquakes may extend down to depths of 700 km before the sub ducting plate heats up and loses its ability to deform in a brittle fashion.

As the oceanic plate subducts, it begins to heat up causing the release water of water into the overlying mantle asthenosphere. The water reduces the melting temperature and results in the production of magmas. These magmas rise to the surface and create a volcanic arc parallel to the trench. If the subduction occurs beneath oceanic lithosphere, an island arc is produced at the surface (such as the Japanese islands, the Aleutian Islands, the Philippine islands, other Caribbean islands

Where lithospheric plates slide past one another in a horizontal manner, a transform fault is created. Earthquakes along such transform faults are shallow focus earthquakes.

Most transform faults occur where oceanic ridges are offset on the sea floor. Such offset occurs because spreading takes place on the spherical surface of the Earth, and some parts of a plate must be moving at a higher relative velocity than other parts One of the largest such transform boundaries occurs along the boundary of the North American and Pacific plates and is known as the San Andreas Fault. Here the transform fault cuts through continental lithosphere

Areas where rising plumes of hot mantle reach the surface, usually at locations far removed from plate boundaries are called hot spots. Because plates move relative to the underlying mantle, hot spots beneath oceanic lithosphere produce a chain of volcanoes. A volcano is active while it is over the vicinity of the hot spot, but eventually plate motion results in the volcano moving away from the plume and the volcano becomes extinct and begins to erode.

Because the Pacific Plate is one of the faster moving plates, this type of volcanism produces linear chains of islands and seamounts, such as the