WHO Defines Food security to exist when all people, at all times, have physical, social and economic access to sufficient, safe and nutritious food which meets their dietary needs and food preferences for an active and healthy life. 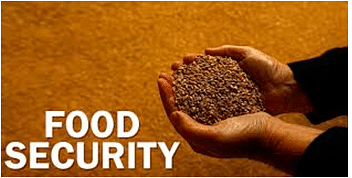 Food security has three interlinked contents such as :-

Food security is a multidimensional concept covering even the micro level household food security,energy intakes and indicators of malnutrition.

Major components of food security are:-

Indian Agriculture is rightly called as a gamble with Monsoon, variability in food production and rising population creates food insecurity in the nation and worst affected are the downtrodden section of the society.

While India has seen impressive economic growth in recent years, the country still struggles with widespread poverty and hunger. India’s poor population amounts to more than 300 million people, with almost 30 percent of India’s rural population living in poverty. The good news is, poverty has been on the decline in recent years. According to official government of India estimates, poverty declined from 37.2% in 2004-05 to 29.8% in 2009-10.

India suffered two very severe droughts in 1965 and 1966. Food Aid to India was restricted to a monthly basis by USA under the P.L. 480 programme.  The Green Revolution made a significant change in the scene. India achieved self-sufficiency in food grains by the year 1976 through the implementation of the seed- water-fertilizer policy adopted by the Government of India.

Food grain production increased four-fold during 1950-51 and 2001-2002 from 51 million tons to 212 million tones. The country is no longer exposed to real famines. But the regional variation in

the success of Green Revolution which was chiefly limited to northern- Western states has led to the divide in the nation. Evergreen revolution and Bringing green revolution to eastern India is the need of the hour.

Green revolution was focused on wheat and rice and thus the production of pulses was stagnant.

Government through Public Distribution System has tried to counter the problem of food insecurity by providing the food grains through fair price shops.

The central Government through Food Corporation of India has assumed the responsibilities of procurement,storage,and transfer and bulk allocation of food grains to state governments. 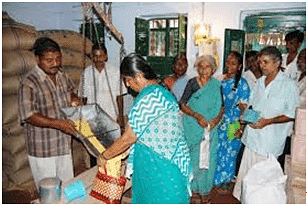 The public distribution system (PDS) has played an important role in attaining higher levels of the household food security and completely eliminating the threats of famines from the face of the country, it will be in the fitness of things that its evolution, working and efficacy are examined in some details.

PDS was initiated as a deliberate social policy of the government with the objectives of:

i) Providing food grains and other essential items to vulnerable sections of the society at reasonable (subsidised) prices;

ii) to have a moderating influence on the open market prices of cereals, the distribution of which constitutes a fairly big share of the total marketable surplus; and

iii) to attempt socialisation in the matter of distribution of essential commodities.

The focus of the Targeted Public Distribution System (TPDS) is on “poor in all areas” and TPDS involves issue of     35 Kg of food grains per family per month for the population Below Poverty Line (BPL) at specially subsidized prices. The TPDS requires the states to Formulate and implement:-

Its distribution in a transparent and accountable manner at the FPS level.

A depositary receipt (DR) is a type of negotiable (transferable) financial security that is traded on a local stock exchange but represents a security, usually in the form of equity that is issued by a foreign publicly listed company. The DR, which is a physical certificate, allows investors to hold shares in equity of other countries. One of the most common types of DRs is the American depositary receipt (ADR), which has been offering companies, investors and traders global investment opportunities since the 1920s.

A bank certificate issued in more than one country for shares in a foreign company. The shares are held by a foreign branch of an international bank. The shares trade as domestic shares, but are offered for sale globally through the various bank branches.

Global Depository Receipts facilitate trade of shares, and are commonly used to invest in companies from developing or emerging markets.

An American Depositary Receipt (abbreviated ADR) represents ownership in the shares of a non-U.S. company that trades in U.S. financial markets. The stock of many non-US companies trade on US stock exchanges through the use of ADRs. ADRs enable U.S. investors to buy shares in foreign companies without the hazards or inconveniences of cross-border & cross-currency transactions. ADRs carry prices in US dollars, pay dividends in US dollars, and can be traded like the shares of US-based companies.

Each ADR is issued by a U.S. depositary bank and can represent a fraction of a share, a single share, or multiple shares of the foreign stock.

An unsecured, short-term debt instrument issued by a corporation, typically for the financing of accounts receivable, inventories and meeting short-term liabilities. Maturities on commercial paper rarely range any longer than 270 days. The debt is usually issued at a discount, reflecting prevailing market interest rates.

A designation of a securities issue given by the Securities and Exchange Board of India (SEBI) that allows an Indian-listed company to raise capital from its domestic markets without the need to submit any pre-issue filings to market regulators. The SEBI instituted the guidelines for this relatively new Indian financing avenue on May 8, 2006.

The Indian Income Tax Act contains large number of exemptions from total income. Besides exemptions, there are several deductions permitted from gross total income. Further, depreciation allowable under the Income Tax Act is not the same as required under the Companies Act. The result of such exemptions, deductions, and other incentives under the Income tax Act in the form of liberal rates of depreciation is the emergence of Zero tax companies which inspite of having high book profit are able to reduce their taxable income to nil.

The system of minimum alternate tax has accordingly been introduced under which a company is required to pay a minimum tax of 7 % of the book profit in case the tax on the total income computed under the normal provisions of law works out to less than this amount [Sec 115JB].

It is a private commodity exchange in India that is a joint venture of Financial Technologies (India) Ltd.

India is a member of the Basel Committee on Banking Supervision. It has actively engaged in the development of the Basel III accord. Proposals entail:

This would limit their leverage and mandate them to build up capital buffers in good times that can be drawn down in periods of stress.

The problem with such loans is that there is a greater risk of default as the interest rate increases.

Incorporated in 2008. To consolidate and integrate the multiple systems with varying service levels into nation-wide uniform and standard business process for all retail payment systems. Promoted by 10 banks.

The method can show the incidence, intensity and depth of poverty, as well as inequality among the poor, depending on the type of data available to create the measure

Though there are about 25 commodity exchanges in India, the following are the major ones:

These are regulated by the Forward Market Commission setup in 1953

It is a form of insurance against debt default. When an investor buys corporate (or govt) bonds he/she faces the risks of default on part of the issuing agent. The investor can insure its investment in such bonds against default through a third party. The investor pays a premium to the party providing insurance. In the event of default by the bond issuer, the insurer would step and pay the investor. A CDS is just that insurance, which is bought by those who fear default and sold by those who believe it won’t.

Takeout finance is essentially a mechanism designed to enable banks/lenders to avoid asset liability mismatch that may arise out of extending long tenor loans to infrastructure projects. Under this arrangement, banks that extend credit facility to infrastructure projects enter into an arrangement with a financial institution for transferring the loan outstanding in the banks’ books to the books of the financial institution who take out the loan.

Subsequent to the announcement in the Union Budget of 2010-11, the government entrusted India Infrastructure Finance Company Ltd (IIFCL) with the task of introducing the Takeout Finance Schemes (TFS)