We’ve been studying a lot about the Wired Network. Ethernet is the most common example. Wired networks differ from wireless which use radio waves rather than transmitting electrical signals over the cables.Wi-Fi stands for Wireless Fidelity. It is a technology for wireless local area networking with devices based on IEEE 802.11 standards.Wi-Fi compatible devices can connect to the internet via WLAN network and a wireless acces point abbreviated as AP. Every WLAN has an access point which is responsible for receiving and transmitting data from/to users.IEEE has defined certain specifications for wireless LAN, called IEEE 802.11 which covers physical and data link layers.

The architecture of this standard has 2 kinds of services:1. BSS (Basic Service Set)2. ESS (Extended Service Set) BSS is the basic building block of WLAN. It is made of wireless mobile stations and an optional central base station called Access Point.Stations can form a network without an AP and can agree to be a part of a BSS.A BSS without an AP cannot send data to other BSSs and defines a standalone network. It is called Ad-hoc network or Independent BSS(IBSS).A BSS with AP is infrastructure network.The figure below depicts an IBSS, BSS with the blue coloured box depicting an AP. 1. Mobile – stations inside the BSS2. Stationary – AP stations that are part of wired LAN. 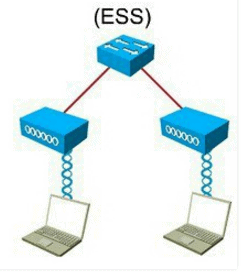 The topmost blue box represents the distribution system and the other 2 blue boxes represent the APs of 2 BSSs.